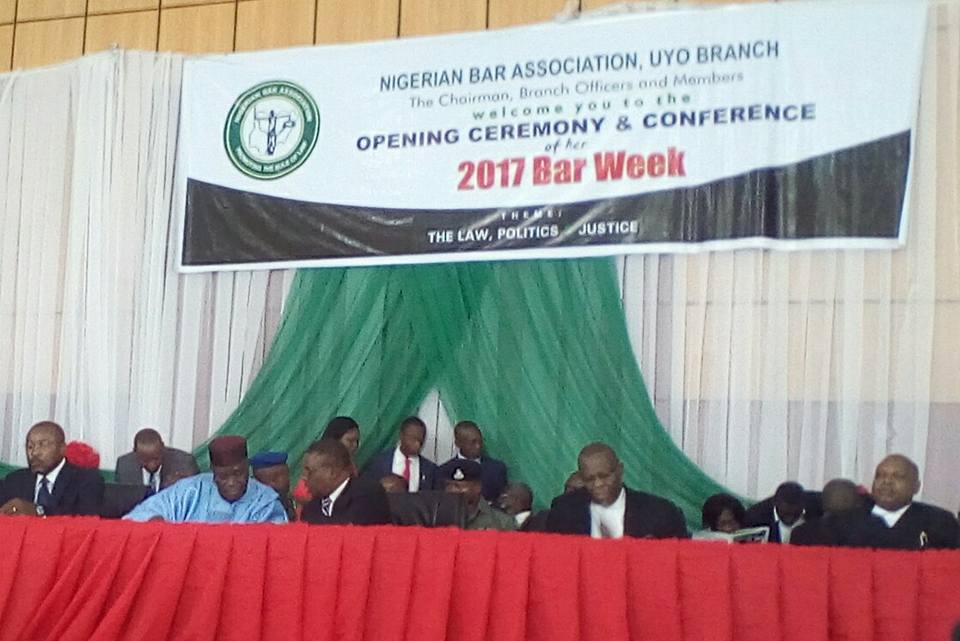 The Executive Governor of Akwa Ibom State, Mr. Udom Emmanuel, has challenged lawyers to evolve ways that will make the existing legal system of the country less cumbersome and in tandem with the realities of contemporary times.

Governor Udom Emmanuel gave the charge at the opening ceremony of the 2017 Bar Week organized by the Nigerian Bar Association, Uyo Branch. He  further called on lawyers to be more practical by making workable recommendations that would change the tide of the  present legal system for the better.

In his words: “I wish to use this opportunity to urge you to go beyond rhetorics in the course of this meeting, to proffer genuine and functional solutions towards the promotion of a truly dynamic legal system that will address perceived inherent contradictions in the system.”

The Governor, represented by his Deputy, Mr. Moses Ekpo, also observed “I think the theme of this year’s Bar Week, ‘The Law, Politics, and Justice’, holds great prospects in addressing issues that are of fundamental relevance to both the law practice and in advancing the cause of our polity.”

He described the Bar Week as “a foremost point of convergence where members of the legal profession come together to x-ray developments in their practice, brainstorm about issues of contemporary relevance as well as proffer ideas and solutions to burning professional and national issues.”

Earlier in his address, the Acting Chief Judge of Akwa Ibom State, Justice Godwin Abraham, urged that “the discussions at this Bar Week should give us an inroad to determine whether, having regards to our legal system, the political processes, and the Courts’ intervention, we can safely say that the interface between law and politics has resulted in justice in our Nation.”

The Chairman of The Nigerian Bar Association, Uyo Branch, Mr. Aniekan Akpan, in his address earlier, stressed the significance of the Week and assured of the commitment of its members to make the best out of the meeting for the advancement of the cause of the profession and the State.

Mr. Akpan also urged the State Government to “provide residential accommodation and vehicles for the Judges of Customary Court of Appeal for proper functioning of the appellate Court in Uyo as over 70% of the cases originate from Uyo when we go to the Court of Appeal in Calabar.”

He moreover stressed the need for the Bench and the Bar as well as the State Government and the Bar to relate and partner properly for the smooth running of the State’s Judicial and legal system and for the overall benefit of our people.

[Photos] President Buhari at the Opening Ceremony of the Judges’ Conference