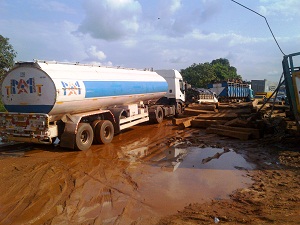 The Niger Government, has concluded plan to enact a law that would regulate the weight of trucks, plying the state roads, Gov. Abubakar Bello said on Tuesday in Minna.

The disclosure was contained in a press statement signed by Idris Ndache, the Chief Press Secretary to the Governor and made this available.

Bello expressed displeasure on the damage being done to major roads in the state by heavy duty and articulated vehicles.

Aside from the proposed legislation, the governor of Niger state, said government would reintroduce weighbridge in order to ensure that operators of the affected trucks comply with the carrying capacity of our roads.

The governor particularly expressed dismay on the deplorable state of Minna/Suleja federal highway.

He said that the frequency at which repaired roads were damaged was due to the activities of overloaded vehicles plying the roads.

Bello noted that despite the economic downturn in the country, the state had committed huge resources in rehabilitating major roads in the state.

He expressed dissatisfaction that all efforts had failed to deliver the desired result, as the roads were damaged by overloaded heavy duty trucks as soon as they were fixed.

“We cannot continue to use public funds to repair roads while heavy duty trucks destroy our efforts.

“We have tried our best to see to it that our roads are in good condition for the benefit of our people.

“But the more we repair the roads, the more overloaded heavy duty and articulated vehicles damage the roads.

“We are coming up with strong laws that will prohibit trucks carrying overloads on our highways”.

Gov. Bello tasked the law enforcement agencies to enforce various highway codes and laws, by ensuring that overloaded vehicles are not permitted to ply the roads.

JUSUN in Crucial Meeting with NJC over Strike