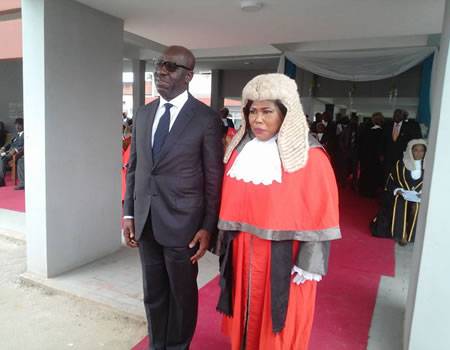 The Governor of Edo State, Mr Godwin Obaseki, has pledged that his administration will continue to strengthen the state judicial system for effective service delivery.

Legal Year, held at the High Court of Justice in Benin City, on Friday.

The governor commended the state’s judicial system for its performance in the past legal year and said that “no meaningful development can be achieved without a vibrant judicial system. Our democracy can only survive if there is strict adherence to the Rule of Law.”

He assured that his administration was working to strengthen the state’s judicial system through increased funding and construction of an ultramodern court complex, which will be completed before the end of the 2017/2018 legal year.

He said that the state is building a digital technology-based legal system to be maintained by 150 stenographers, who would be trained to make the technology available in the courts. He added that there are plans to construct a complex for the Industrial Court as well as relocate the Court of Appeal from its flood-prone area in the state.

He commended the state judicial system for its support to his administration and pledged that his government would continue to support the judiciary and respect the rule of law.

Earlier, the Chief Judge of Edo State, Hon Justice Esohe Ikponmwen, said her administration has zero-tolerance for corruption and was committed to building a corruption-free judicial system.

She also said that the total revenue accrued from the judiciary of Edo State stood at N272, 095, 745.63 as at the end of the out-gone legal year.

She commended governor Obaseki for building a new High Court complex and offices, noting that it will promote the administration of justice in the state.