Home News Was Ogedengbe Trying to Bribe the Judge? 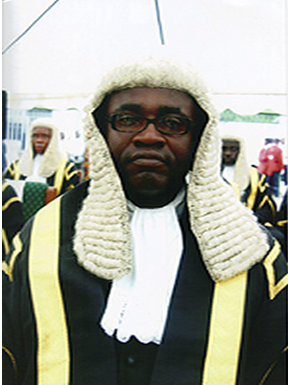 It was on Thursday, 16th February, 2017, the Courtroom was unusually filled to its capacity. At exactly 9:02 a.m, Hon. Justice Olayinka Faji (He replaced Justice Seidu at Court no 2, Federal High Court, Lagos) commenced sitting for the business of the day. Nobody in the courtroom had any inclination of the drama that was going to unfold.

Justice Faji was unassuming, relaxed and looking more like someone who has come to do what he enjoys doing. He was really cheerful, he greeted lawyers with a welcoming nod and a smile  and the business of the day began. The first matter was uneventful. Then came the drama. To the shock of everyone present, both counsel and litigant alike, the moment following interaction ensued between the judge and a certain Mr. Ogedengbe the moment he announced his appearance on an ex-parte application brought in an attempt to arrest a vessel:

Justice Faji – Yes, Mr. Ogedengbe, you wrote a letter to me?

Ogedengbe – Yes my Lord, the Secretary told me to write the reason why I wanted to see your Lordship the other day sir.

( like a little child standing before an evil teacher, Mr. Ogedengbe began!)

Justice Faji– Mr. Ogedengbe read your letter to me and read it loud, I want everyone to hear you.

Ogedengbe summoned courage and read his letter. summary of the letter below:

My Lord, I understand the enormity of your job. Your court room is always filled up and I really appreciate you lordship for your hardwork. I have an ex parte application before your lordship. The ex-parte application has some details which I would not want to bother my Lord with in open court. The details need “Personal Touch”) and that is why I want to discuss same in chambers with my Lord!

Justice Faji – Is there anyone here who was called to bar 2014 and below? (3 chaps stood up almost immediately) you, (pointing at one of them) did you hear him?

Justice Faji – What do you think of this letter?

Young Lawyer – My Lord, the letter is not professionally written and it suggests that the person wanted to discuss personal issues on the case with my Lord.

Justice Faji – Ogedengbe, a lawyer, less than two years post call is teaching you practice ethics.  How could you write such a letter to me? Where you coming to discuss how to bribe me to favour you? When did lawyers become very free to approach a judge handling their matter for little or no reason? (Long story short, Justice Faji took Ogedengbe to the cleaners!)

What was Ogedengbe’s reaction all the while?  Well, whatever you guessed is right except that he didn’t have any justification howsoever for his action. Yes he was trying to say things like “ ahh My Lord, I don’t have money to bribe a judge (as if it is only money that influence); My Lord, I was only… I only wanted to …

Really, Ogedengbe did not have any reason to embark on such a journey on a matter which was coming up the next day, a matter which has nothing complex attached to it except that he had a judgment debt to satisfy and he intends to arrest a vessel. What was the need to insist on seeing the judge to the extent that he (the Judge) became irritated and requested his secretary to ask that you write your reason for coming? What was going on in his mind when when he penned down such request? Is it the case that Ogedengbe belongs to the group of lawyers who know just  how to get “justice” the jungle way? What gave him the unflinching gut?