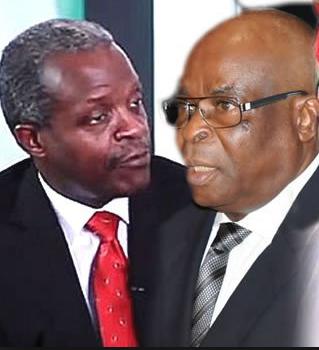 Acting President Yemi Osinbajo and the Chief Justice of Nigeria (CJN), Justice Walter Onnoghen, have both spoken against corruption in the judiciary.

The Acting President spoke while opening a two-day National Dialogue on Corruption, organised by the Office of the Vice President in collaboration with the Presidential Advisory Committee Against Corruption (PACAC).

He urged Nigerians to stop celebrating treasury looters insisting that it is unfortunate that someone accused of corruption is celebrated in his hometown because people believe he has taken his share of the national cake.

He recalled that when he initiated reforms in the Lagos judiciary as Attorney-General in 1999 aimed at curbing corruption, he was accused of ethnicity and witch-hunt, but was not deterred.

Among the problems he addressed, he said, was the mode of appointment of judges that was based on “man-know-man”, as well as welfare, as judges were then paid N67,000, which could not meet their basic needs.

The reforms, he said, led to the sack of 22 corrupt magistrates and three judges within one year. A 2006 survey showed zero percent corruption in the judiciary, as against 89 per cent in 2006.

“Today someone who is corrupt is celebrated. There is a problem that we must resolve, and if we don’t resolve it, it will hurt us very, very badly, just as it is hurting us already,” he said.

“We can only resist corruption when we ensure that systems put in place are working.

“When the very best people say that there is no consequence of bad actions, they suddenly turn bad.

“It was because a system was in place and impunity was not allowed. It is important that we put in place models that will work.

“We must work together – the legislature, the judiciary and the executive – to put a model that must work. We must ensure that systems that are put in place are fair and comply with the rule of law,” he said.

On his part, Onnoghen, making his first public appearance a day after his confirmation by the Senate, admitted that “a few bad eggs exist within the judiciary”, but restated his commitment to collaborate with other arms of government to fight the scourge.

“The judiciary finds itself being battered left, right and centre. So, what should the CJN say on an occasion like this, which will not appear as a defence of his institution?” he said.

“The only way there can be justice is when everyone respects the constitution and the rule of law.

“The judiciary holds these principles dear, because that is the only way we can ensure an orderly society, and ensure the maintenance of democracy and justice for all.

“So, if you are to fight corruption, then you should fight the culture of impunity which is attitudinal, by adhering strictly to the constitutional provisions and the rule of law.

“If we allow the rule of law to reign, then there will be a dramatic reduction in corruption and injustice. That is how I see it.

“The judiciary is painted with a brush like an institution that epitomises corruption; that is not fair; that is not correct. We have gentlemen on the bench, and by its nature, judicial officers can only be seen and not be heard.

“So, when you’re dealing with judicial corruption, you ought to do it in accordance with the rule of law and channel whatever you have through the appropriate channel so that you don’t destroy that institution, because destroying it will not do us any good. Yes, we can do more.”

Killer Of Jumia Agent In Port Harcourt To Die By Firing...