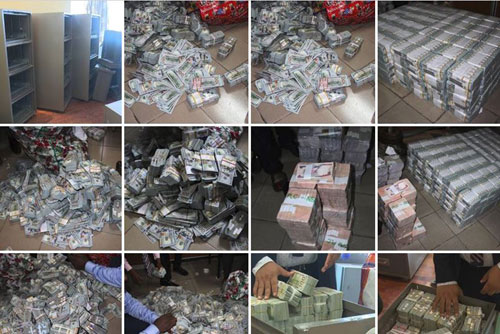 It, therefore, prayed Justice Muslim Hassan to make an order of final forfeiture of the money to the Federal Government.

The judge, while ordering a temporary forfeiture of the money on April 13, directed EFCC to advertise the order in a newspaper so that anybody who owns the money can claim it within 14 days.

EFCC’s lawyer, Rotimi Oyedepo, said no one showed up in court to show cause why the money should not be permanently forfeited.

EFCC, in an affidavit in support of the application for final forfeiture of the sums, deposed to by a Detective Inspector Mohammed Chiroma, said Oke’s wife, Folasade, allegedly owns the apartment in which the monies were found.

It said she bought the flat from Fine and Country Limited for $1.658 million between August 25 and September 3, 2015 in the name of Chobe Ventures Limited.

According to EFCC, Mrs Oke and her son, Master Ayodele Oke Junior, were the directors of Chobe Ventures.

EFCC, which tendered the receipt of payment, said Mrs. Oke paid for the apartment in cash in tranches without going through a financial institution.

“The circumstances leading to the discovery of the huge sums stockpiled in Flat 7B, Osborne Towers, leaves no one in doubt that the act was pursuant to an unlawful activity.

“The very act of making cash payment of $1.6 million without going through any financial institution by Mrs. Folashade Oke for the acquisition of Flat 7B, Osborne Towers, is a criminal act punishable by the Money Laundering (Prohibition) Amendment Act.

According to EFCC, Chobe Ventures was merely incorporated to retain proceeds of suspected unlawful activities.

Oyedepo said Chobe Ventures did not challenge the temporary forfeiture order despite being served with the motion on notice at its 8, Ogunmodede Street, off Allen Avenue, Ikeja, Lagos office.

“In view of the failure of Chobe Ventures Limited, in whose custody these properties we are seeking to forfeit were found, to show cause before My Lord why the property (money) should not be forfeited to the Federal Government of Nigeria, your Lordship should hold that Chobe Ventures Limited has admitted all the facts deposed to in our affidavit and order the final forfeiture of the property to the Federal Government,” Oyedepo said.

The lawyer sought an order directing the EFCC to furnish the court with a report of its preliminary or final investigation on the source of the money, its owner, and how the currencies got into the building.

He is also praying for an order compelling the EFCC, the Independent Corrupt Practices and other Related Offences Commission (ICPC) and the police to immediately begin a thorough investigation of the cash.

Ogungbeje, in a motion on notice, is praying for a stay of proceedings pending the outcome of the investigation by the Osinbajo panel.

According to him, the court should not order a permanent forfeiture of the money since there are claims and counter claims as to its ownership.

Ogungbeje’s lawyers, Messrs Sanni Saheed and Yakub Eleto, contended that making a final forfeiture order on the money without the conclusion of the Osinbajo’s panel’s investigation would overreach the panel.

But Oyedepo described Ogungbeje as a meddlesome interloper who has no locus to bring the applications.

He urged Justice Hassan to dismiss the application with a heavy cost against Ogungbeje for time wasting.

Reacting last night, a top source in NIA said: “If one uses normal civil procedure for security duties, then nothing will work.

“The details EFCC is given is the normal security ways of doing things. There must be cover story for all acts.

“It is normal to use proxy for classified  actions.

“In most cases, the proxies are not even aware of the full details of the assignment they are embarking on.