Home Headline Read: Highlights of the NEC Address by the NBA President 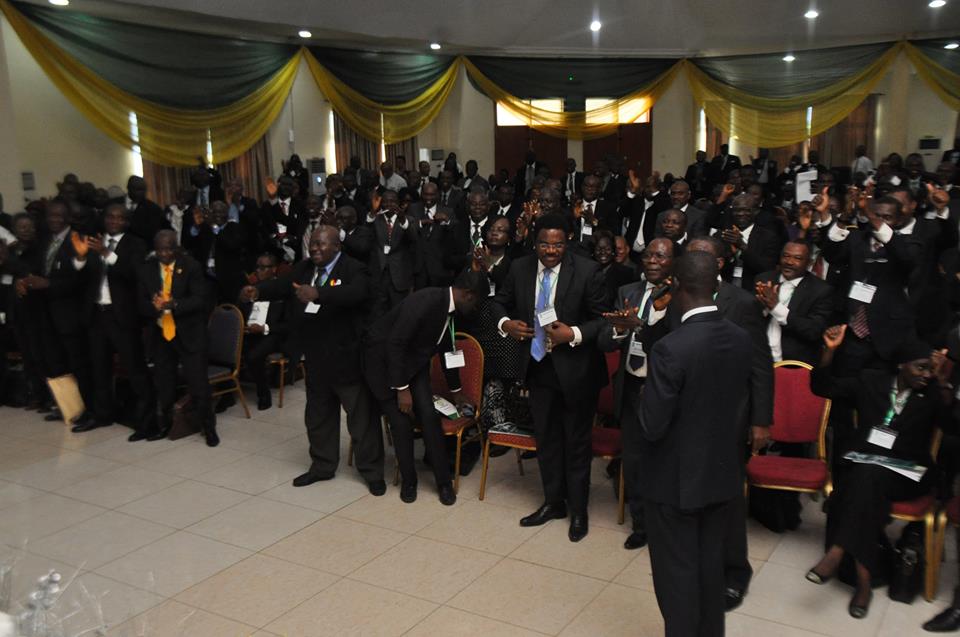 ON THE NBA CONSTITUTION

ON THE STATE OF THE NATION

The NBA President called for the protection of Nigeria’s democracy, following rules of constructive engagement on the part of all civil societies and professional bodies, saying that although our country continues to face challenges there are enormous potentials in Nigeria.

He condemned instigation for military intervention in the governance of the country, warning that Nigeria’s democracy must not be endangered by any undemocratic change of government. He commended the Nigerian Military for restoring security in the North East, Niger Delta and other areas of conflict.

The NBA President announced NBA’s commitment to national unity and the integrity of the Nigerian State and willingness to support genuine peaceful initiative of constitutional reforms in governance. He said that all groups who were dissatisfied with the structure of the Nigerian state were free to agitate for reforms and improvements, nut this must be done in peaceful manner.

A. B. Mahmoud OON, SAN, went further to condemned all forms of crimes and carnage caused by insurgency, kidnapping, militancy, the Southern Kaduna crisis, conflicts between herdsmen and farmers, and other forms of communal and sectarian clashes. He announced that the NBA undertook a mission to Southern Kaduna to meet with communities and their leaders in order to douse the tension and seek solutions to the strife and violence in that region. He also recognised conflicts in parts of Zamfara state especially between herders and farmers and urged both Federal and state governments to act in a concerted manner to address these conflicts.

He told NEC meeting that the NBA is currently working with other civil society groups to develop a transitional justice policy framework that will be proposed to the government for adoption.

ON THE STATE OF THE ECONOMY

Speaking on the State of the economy, A. B. Mahmoud OON, SAN; said that there are indications that Nigeria’s economy is beginning to ease out of recession although the business community continued to express skepticism about the adequacy of government’s strategy. He admonished more aggressive implementation of the various programs and initiatives under the Economic Recovery Growth Plan (ERGP) including creating more jobs for Nigerian youths.

He commended the Presidency for the three Executive Orders recently signed by the Acting President, Prof. Yemi Osinbajo, SAN, targeting the removal of obstacles to private business, government budgeting, and movement of people and goods between Nigeria and other Countries. However, he expressed worries that close to the end of the second quarter of 2017, the 2017 appropriation bill was yet to be passed into law. He used the medium of NEC Meeting to call upon the National Assembly and the Presidency to expedite action in respect of the 2017 appropriation bill with a view to passing the 2017 Appropriation Bill into law. He commended the government for diversification of the economy, investing in agriculture, and promoting made in Nigeria goods.

ON THE ANTI-CORRUPTION CRUSADE

He also admonished government agencies involved in the criminal justice administration to demonstrate a greater level of cooperation and professionalism since the fight against corruption was central to the attainment of our national development objectives. He pledged support for Hon. Justice Emmanuel Ayoola’s anti-corruption initiative and the current electoral reforms and review of the Constitution by the National Assembly but advocated an open, transparent, and inclusive approach in the amendment process.

The NBA President commended the Senate’s proposal for e-voting but decried the reluctance of the Executive and National Assembly to take very seriously the issue of electoral offences.

The NBA President frowned at the continued detention of Sheik Ibrahim El-Zakzaky, his wife and Colonel Sambo Dasuki in flagrant disobedience to court orders; then called on government to terminate the investigations against those judges who have not been prosecuted to enable them resume work as judicial officers.

ON THE VISION FOR #ABRAVENEWBAR

A. B. Mahmoud, emphasised that the vision for #ABraveNewBar which rests on the four-point agenda of Regulation, Representation, Re-engineering, and Public interest (3Rs-P) and being driven by this NBA administration is driven with bravery, and with the collective support of all NBA members will succeed. He told the NEC meeting that NBA Strategic Plan was approved in February 2017 at the last NBA NEC meeting in Aba clearing the pathways for our activities and programmes, forming the basis of partnership with our development partners.

Communications Team
Office of the President of the NBA (OPNBA)
June 5, 2017