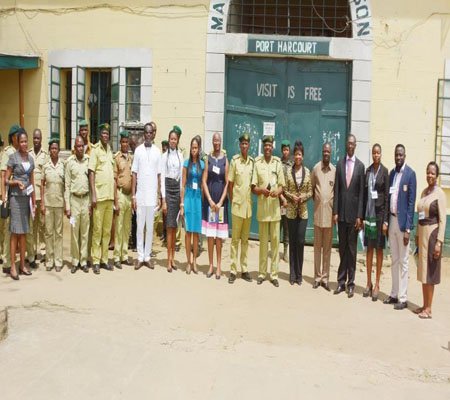 The Chief Judge of Rivers State, Justice Adamma Iyayi-Lamikanra, has freed 49 inmates of prisons in the state as part of activities to mark the Golden Jubilee celebration of the state.

The chief justice held special court sessions at the prisons where the inmates were granted freedom.

She visited the Maximum Security Prison in Port Harcourt and discharged and acquitted 49 inmates and noted that the beneficiaries were those who had been there since 2010 and had minor cases.

In continuation of the visit, Iyayi-Lamikanra on Wednesday also freed 36 inmates from the Maximum Security Prisons in Port Harcourt, the state capital.

The discharged persons are a female and 35 males who were on awaiting trial with capital offences, and who have been detained for over four years and above without being tried.

Delivering her address, the CJ also stated that the discharged persons had been on awaiting trial with minor offences and added that those granted bail, but could not meet their bail conditions were no longer appearing in court.

She said, “A state chief judge carries out yearly or quarterly gaol delivery exercise as contained in and mandated by the provision of the criminal justice (Release from Custody) (Special Provisions) Act Cap 40, Laws of the Federation of Nigeria, 2004.

“The concept of jubilee dates back to biblical times where people in bondage receive mercy and are set at liberty as part of the celebration. This gaol delivery exercise embarked by me today, May 9, 2012, is a special one; it is done in commemoration of or to mark golden jubilee celebration of Rivers State

“Rivers State is 50 years old, having been created in May, 1967. This gaol delivery exercise is part of the activities or events marking the Rivers State Golden Jubilee celebration.

“On my part, this celebration is now brought to awaiting trial inmates under the Act as they are part of our society who should partake and share the joy of the Rivers State Golden Jubilee celebration.”

The jurist also said, “Others not within my power to release, I am sure His Excellency, the Governor of Rivers State, Chief Nyesom Wike, may deem it just and convenient to exercise his executive powers of prerogative of mercy under the constitution.”

Iyayi-Laminkanra promised that the exercise would be carried out periodically in order to decongest the prisons, which she pointed out was currently accommodating 3,998 against the originally planned 804 capacity.

She urged the discharged inmates not to go back to their crimes that would make them return to the prison.

However, the Comptroller of Prison in the state, Dr. Loveday Onu, stated in his address that the major problem facing prison was the influx of awaiting trial persons.