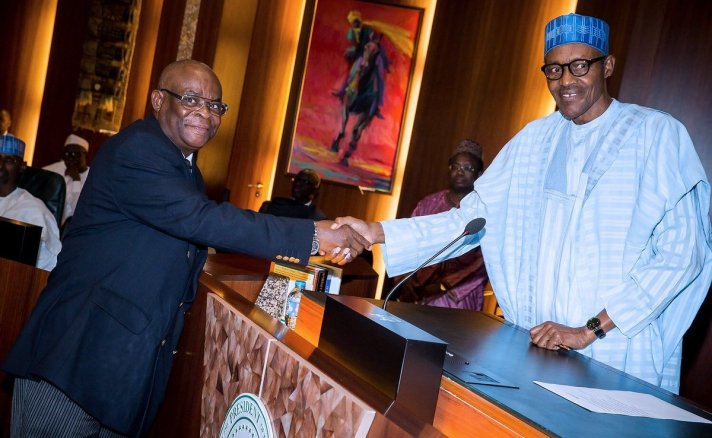 President Muhammadu Buhari has been under fire for causing the delay, although Justice Onnoghen who’s tenure as the Acting Chief Justice of Nigeria (CJN), is due to lapse on Friday. Senior Advocates of Nigeria (SANs) are divided on their views on the delay in forwarding Justice Onnoghen’s name to the Senate for confirmation.

Chief Wole Olanipekun (SAN) and Prof Itse Sagay (SAN) were the first to clash on the issue after Olanipekun issued a statement saying the president was setting a dangerous precedent by not making Onnoghen a substantive CJN. Sagay rallied to the president’s defence by stating that Buhari, is no robot and has every right to reject to retain or jettison Onnoghen’s nomination.

Falana noted that the worries being expressed by Nigerians are unnecessary since the three months Onnoghen ought to act has not lapsed. He also argued that Onnoghen’s tenure acting as CJN could be extended for another three months.
He said: “The Constitution makes provision for three months for an acting Chief Justice of Nigeria.
“For me we are still within the three months. So there is no cause for alarm. And this is not the first time we’re having an acting CJN.
“Right now we have many acting chief judges in the states. Heaven will not collapse. I believe before the three months expire, the government will address the issue. So there is no cause for alarm.”

But All Progressives Congress (APC) National Legal Adviser Banire, described Onnoghen’s acting capacity as an “error”.
“On the part of the Nigerian Bar Association (NBA), we have taken our position that the error needs to be corrected.
“I want to see it as an error. I’m quite positive that shortly, that will be corrected,” he said.
Awomolo believes Onnoghen’s acting capacity ‘unfortunately’ diminishes the honour, integrity and status of the ‘high office’ of the head of Judiciary.
The president, according to him, ought not to deviate from NJC’s recommendation as constitutionally provided.
“The president, with respect, after recommendation of the NJC, has no executive function in the determination of who to appoint as the Chief Justice outside the recommendation of the National Judicial Council,” he stressed.
“He is not to screen, interview, subject to administrative or executive scrutiny.
“The president is ceremonially required to pass the recommendation of the NJC for confirmation by the Senate any person recommended to him.
“The President as the Chief Executive officer of Nigeria is not the head of the NJC.
“He cannot perform the executive functions of the NJC which is equipped with personnel, resources and power to assess the health, qualification and suitability of candidate to be recommended to occupy the office.
“The president has no ability or executive powers to assess a candidate on the basis of Constitutional requirement of a person recommended. It is the prerogative of the National Judicial Council.
“The Constitution does not allocate any executive functions to the President and the President cannot appropriate or share the Constitutional function of the NJC.
“The president has no power, with respect, to subject the recommendation to his test of ability, suitability and competence.
“Indeed, the Senate which has the power to confirm the suitability of candidates recommended may examine with the NJC the check list employed by the Council.” Awomolo urged the executive to act swiftly to avoid a crisis.
“There is around the corner another danger and that is whether from 10th February 2017 the Acting Chief Justice must cease to be in the office of the CJN.
“Whether the president can, without recommendation of the NJC appoint another Acting CJN? Whether the Acting Chief Justice or the next most senior Justice of the Supreme Court can presides over the meeting of the Council to determine and recommend another Acting CJN?
“Legal practitioners are very concerned because what paralysed the Rivers State Judiciary is likely to repeat itself at the Federal level,” he said, while urging the Attorney-General of the Federation to properly guide the President.

But Adetola-Kaseem said Onnoghen’s appointment as the acting CJN does not contravene the constitution.
He is of the view that under Section 231(4) and (5) of the constitution Onnoghen may legally carry out the functions of the CJN in an acting capacity until February 10, when his three-month stint in the post will come to an end.
He said: “Section 231(4) of the constitution is very clear. It provides that if the office of the CJN is vacant or if the owner of the office is unable to perform the functions of that office for any time, the president may appoint the most senior justice of the Supreme Court to function, i.e. to perform the duties of the office of CJN for three months and thereafter, until the substantive holder resumes office.
“But after the three months the president cannot reappoint the same person, the most senior justice who has been appointed to function in the office of the CJN, he cannot reappoint him for another period, whether three months or for whatever length of time.
“To appoint somebody, the language in Sections 231(4) and (5) is very clear. Although the statute doesn’t use the word ‘acting’ appointment, it states that somebody is appointed to perform the duties of an office which he is not holding substantively.
“This means that he is to act in that office for three months. After three months, the president cannot reappoint him to perform the functions of that office unless with the approval of the National Judicial Council.”

Ogunba called for an appraisal system in determining who is to be appointed CJN, rather than making it a matter or seniority.
That way, the best brain in the Supreme Court can be appointed CJN instead of the most senior, which many believe is a pattern the President wants to break.
He said: “They can put a template to say if you want to go higher within your career, this is what you should do. They do it in other professions.
“They have performance appraisal on a dispassionate level. We know that in the judiciary, there are bad eggs and some are not optimally performing. Some are not intellectually sound.”
Ogunba is also opposed to the appointment of someone from outside the Bench as a CJN.
He said it would kill the morale of other justices of the Court of Appeal and Supreme Court who have been aspiring either for elevation, or hoping to attain the position of CJN.
“I don’t think it’s good for the system to bring somebody from the outside who has never been a judge and then he’s sitting at the uppermost echelon of the judiciary, just like that.
“The problem of incompetence could be solved, not by a kneejerk reaction of bringing somebody from the outside, but to put a template by which justices are appraised. It could be based on number of judgments. So if someone is junior to you in hierarchy surpasses you in terms of judgment output, ordinarily he should get it.
“When they do that, even the incompetent ones will sit up. The person you are bringing from outside who has not been tested on the job, are you sure of his output or quality? To cure that evil of non-performance, it doesn’t necessarily mean you have to bring somebody from the outside.”