It has been on the news that Dino Melaye has been evading the service of Recall Notice. All attempts by the INEC to serve him have been abortive. It may be remembered that On June 23, 2017, His constituents submitted a petition to the INEC demanding his recall from the Senate. Amidst this issue of service, there is also another fundamental issue on point of law, to wit, what could be the position of the law if Dino Melaye again approaches the court challenging the recall process as invalid being out of time?

Or the question can still be put as follows: if the constitution stipulates a time frame within which something shall be done, can that time be extended by any authority or person?

This question was succinctly answered by Supreme Court in the case of Marwa v Nyako (2012) LPELR-SC.141/201 as follows:

“It is settled law that the time fixed by the constitution for the doing of anything cannot be extended. It is immutable, fixed like the rock of Gibraltar. It cannot be extended, elongated, expanded, or stretched beyond what it states…”

Similar situation (time limit stipulated by the constitution within which something was to be done) was in issue in the case of PDP V CPC (2011) LPELR-SC.272/2011 (CON). It was in respect of the 2011 general election which produced Goodluck Jonathan as president. Congress For Progressive Change (CPC), the party that sponsored Muhammadu Buhari as its presidential candidate decided to challenge the election. Motion was filed for dismissal of the appeal. The Court of Appeal being an election tribunal in presidential election matters refused to grant the prayers as a result of which appellants appealed to the Supreme Court on the 21st day of July, 2011 and 25th July, 2011 respectively. When the appeals came up for hearing on the 27th day of October, 2011, O. Okpeseyi, SAN and many other counsel wondered whether the appeals were still valid before the court having regards to when the decision appealed against was delivered. The Court called on counsel for the parties to address it on the effects of Section 285(7) of the constitution of the Federal Republic of Nigeria, 1999 (as amended) which provides that an appeal in an election matter shall be heard and disposed of within sixty (60) days from the date of the delivery of judgment. After listening to arguments of Counsel for both parties, Onnoghen J. S. C. who read the lead judgement held thus:

“It is clear that by the use of the word “shall” in Section 285(7) in section of the 1999 constitution the framers of the constitution meant to make and did make the provision mandatory as it admits of no discretion whatsoever. It means that the sixty (60) days allotted in Section 285(7) of the 1999 constitution (as amended) cannot be extended even for one second as the decision of the appellate court must be rendered “within” sixty (60) days of the delivery of the judgment on appeal.”

Per NGWUTA, J.S.C. in a concurring judgment held that:

“Section 285(7) of the Constitution (as amended) is a statute of limitation with regard to the hearing and disposal of appeal in election matters. Any action brought outside a statutorily limited period is time-barred.

Now in respect of recall, it is constitutionally stipulated to be done within 90 days. For the avoidance of doubt, Section 69 of the constitution provides that:

(b) the petition is thereafter, in a referendum conducted by the Independent National Electoral Commission WITHIN NINETY DAYS OF THE DATE OF RECEIPT OF THE PETITION, approved by a simple majority of the votes of the persons registered to vote in that member’s constituency.

On the strength of the decision of the Supreme Court cited above, it is humbly submitted that Dino’s recall is dead by effluxion of time because the 90 days within which he was to be recalled expired on the 23rd of September, 2017. Even the Court of law has no power to extend the time. Because, even in CPC’s case above, it was not Buhari or CPC’s fault that the hearing was delayed. The delay was as a result of the vacation that courts went on but the plea by Gadzama, SAN that the constitution be given broader interpretation by excluding Saturdays and Sundays in computing the 60 days fell in deaf ears. SYLVESTER NGWUTA, J.S.C. remarked as follows.

“Much as I agree, and sympathise, with the Appellants, that they are not in any way responsible for the delay in the matter, I am unable to subscribe to the view that S.285 (7) of the Constitution 1999 (as amended) which is intended to limit time should be interpreted to expand time. That will be contrary to the intendment of the sub-section.”

PETER-ODILI, J.S.C. added that it is not the function of a court of law to sympathize with a party in the interpretation of a constitutional provision merely because, appellants acted timeously and due to no fault of theirs, there is an effluxion of time allotted for the hearing and final determination of the appeal. Going along with what Chief Gadzama is asking of this court is to enter into and possibly take over the functions of the legislature and so the only avenue in dealing with the appeals before us is to do what ought to be done within the context of this constitutional provision of Section 285 and declare the appeals dead and they have been dead for more than 40 days and that is the reality on ground. Nothing can change that.

In the light of the foregoing, the only option left for Kogi electorates is to start the recall process all over again.

However, it is hereby recommended that section 69 of the constitution be amended to exclude Saturdays, public holidays and days which was spent in judicial proceedings in computation of time. 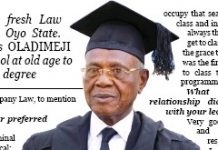