The International Federation of Women Lawyers (FIDA) Nigeria, Rivers State Branch has called on the Rivers State Commissioner of Police to stop violence against children by establishing a special command for the protection of children in Rivers State.

FIDA made this call today during a press conference organized by FIDA and Child Protection Network (CPN), Rivers State in  collaboration with other NGOs in Rivers State to demand for the immediate re-arrest of Ifeanyi Dike who allegedly raped, murder and mutilated the body  of his niece, Little Miss Chimkamso Victory Ernest Mezuwuba. FIDA is also calling for the apprehension of every other Police officer implicated in his escape from police custody.

Find the Press release below.

“VIOLENCE AGAINST CHILDREN MUST STOP, RE –ARREST IFEANYI DIKE”

The underlisted NGO’s and other relevant bodies gather here today the 31st day of August, 2017 to speak against the incessant, unconscionable and undeserved violence against our children with particular reference to the gruesome violence, assault and murder of an 8year old girl Miss Chikamso Victory Ernest Mezuwuba by a relative Mr. Ifeanyi Maxwell Dike (Her father’s brother) for rituals.

The story so far has it that this young brain was molested, drugged, raped, mutilated and her remains was carried and called garbage to be disposed of by one Mr. Ifeanyi Maxwell Dike, a 23year old under graduate of University of Port Harcourt. The suspect was said to have been apprehended by the vigilante group at about 1: 20am and handed over to the Okporo Police division and later transferred to the State C.I.D, Port Harcourt on the 19th of August, 2017. The Police reported that the suspect escaped from their custody after making a confessional statement.

It is so unfortunate that the destiny, future as well as the desires and dreams of young Chikamso Victory and her parents have been intentionally shattered.

The fact remains that children are indeed at the mercy of whoever they find themselves with.

One can only imagine the pain and agony Miss Chikamso would have passed through, in the hands of her killer. The death of Miss Chikamso goes to show that every day, an innocent child is being abused and /or murdered without any trace to the perpetrators.

NO! NO!! NO!!! This VIOLENCE and INJUSTICE must STOP! Ifeanyi Maxwell Dike must be found by the Police. Their act of gross negligence cannot be condoled or tolerated. Every Person who violates the law must be prosecuted and punished accordingly. The issuing of a statement urging the general public to report any useful information for the re -arrest of Mr. Ifeanyi Maxwell Dike for a reward is one way to the re- arrest of the culprit, but should not be solely relied upon or cause the Police to sleep.

This is more than 2 weeks after the untimely death of Miss Chikamso Victory and the culprit is still out there without any trace. We demand that more proactive measures should be adopted for the search of Mr. Ifeanyi Maxwell Dike to ensure that late Miss Chikamso and other unknown victims of Mr. Ifeanyi get Justice and other dastardly act against children could be prevented.

The Child Rights Law of Rivers State provides for a violence free life for every child. We cannot allow these acts of violence against our children to continue. Our hopes and dreams are being truncated with each passing day and the relevant authorities saddled with the task of enforcement and implementation of the laws protecting the children take a lackadaisical approach to it. This is definitely unacceptable. We Demand Justice.

We call for a full time Police protection of the victim’s family and witnesses by the Police. We further call on the Director of Public Prosecution (DPP) Rivers State to take over the prosecution of the dismissed Police officer.

We demand an immediate re-arrest of the said Ifeanyi Dike and apprehension of every other Police officer involved in this act. We demand quick action by the Police authorities to redress the awkward attitude of some Police officers in Rivers State who dump national interest for their selfish interest in such unprofessional manner.

We also call on the Commissioner of Police to create Functional Specialized Children Police Protection Units in all the Divisional Police stations in the State.

Mr Ifeanyi has violated the Right to life of Miss Chikamso and must be punished. There is no hiding place for him. He must be found. 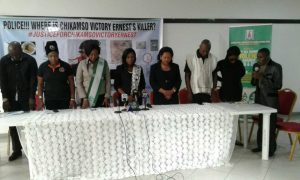 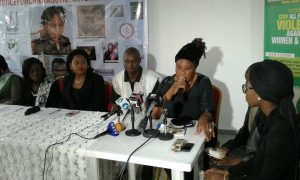 Chikamso’s mum Mrs. Mezuwuba narrating how her daughter was violated and murdered by Mr. Ifeanyi Dike (her husband’s younger brother). 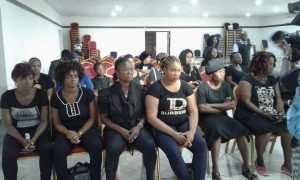 Chikamso’s relatives at the Press Conference 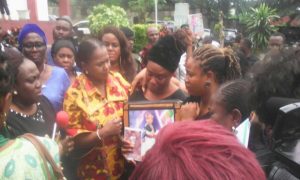 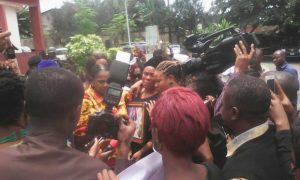 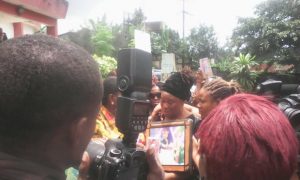 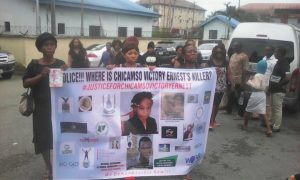 Such a sad one!

We are not out to ridicule the bar, says EFCC