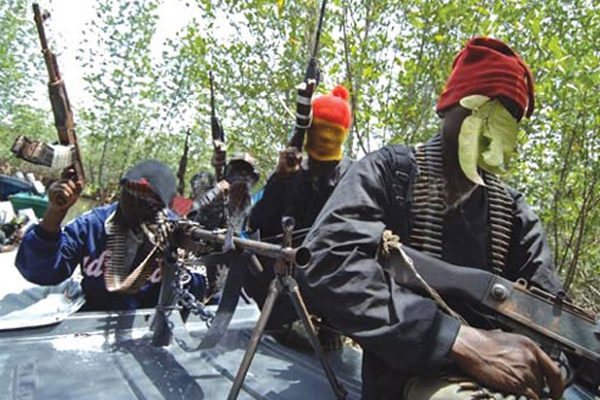 A suspect standing trial for crimes that include kidnapping, Henry Chibueze, also known as Vampire has escaped from Imo High Court premises following a shootout between gunmen and security operatives.

The attack left several persons wounded. No death has been reported so far.

Men suspected to be members of a gang attacked the operatives when the suspected criminal and other inmates arrived at the premises of the Imo High Court in Owerri, the capital of the southeastern state.

Eyewitness said the gunmen, over six of them, found their way into the court premises shortly after about 50 inmates were conveyed to court for hearing of various suits filed against them.

The gunmen opened fire on the security operatives and inmates at the court premises shooting sporadically into the air for over 10 minutes leaving several people wounded,.

According to the eyewitness, the gunmen were able to whisk away Henry Chibueze, whom was described as a “notorious criminal and kidnapper” who has been in prison since July 2015.

“We were here in the court premises when a lawyer came to call us to enter room three for hearing. Shortly after that we started hearing sporadic gunshots. About six gunmen entered the court and started shooting. Some people were even wounded. They came with a Jeep and eventually they whisked away one of the inmates who the prisons officials brought to the court for hearing. The gunshot lasted over 10 minutes,” the eyewitness, who do not want to be named told reporters.

“We Thought They Were DSS”

Confirming the incident to reporters, the spokesman for the Nigeria Police Force in Imo State, Maduba James, said the suspect, Chibueze, also known as Vampire is presently at large and over six people are critically injured due to the sporadic gun shots by the gunmen.

He told reporters that security operatives were on top of the situation to ensure that there was no breakdown of law and order in the state.

Mr James said: “We were in the office this morning when we got a call that some gunmen were in the court premises. We thought they were DSS officials because by then we were conveying over 50 inmates to the state High Court for hearing.

“However, the gunmen attacked some of our men and some of the inmates. They are critically injured now and have been taking to a hospital.

“Meanwhile, one of the inmates, who we know as Vampire, is at large presently but my controller and other security operatives are on top of the situation”.

At the moment, there is heavy presence of security operatives in the court premises and several clusters of people discussing the sad incident.

Death After Castration For Rape Of Minor

Politicians Use Judiciary as Platform for Supremacy Tussle – Ogunye