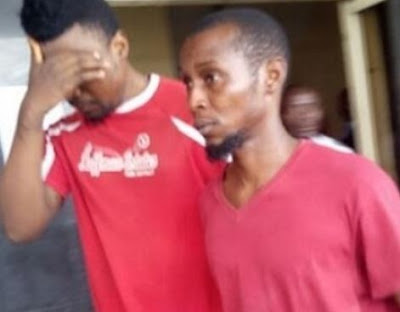 A chief magistrate court sitting in Port Harcourt, the Rivers State capital has remanded two out of the three suspected killers of a Jumia agent, late Eleje Chukwuma, in the Port Harcourt Maximum Prison.

They were said to have killed the victim on the 25th of March this year when he (victim) went to deliver some phones ordered by them from the online mall.

The counts read: “That you Sodienye Mbatumukeke ‘m’ on the 25th day of March, 2017 at No 1 Ada-Ede street, Shell Location Mgbuoba, Port Harcourt in the Port Harcourt Magisterial District did carry offensive weapon, mortar pestle to hit on the head of Ejele Chukwuma ‘m’ and robbed him of one Infinix Note 3 handset valued sixty seven thousand naira (67,000.00), one IM-10 Desktop GSM phone dual sim valued nine thousand five hundred naira (9,500.00) and one Gionee M6 phone valued one hundred and five thousand naira (N105,000.00) total value one hundred and eighty one thousand naira (N181,000.00), property of Jumia Online Shopping Company and thereby committed an offence punishable under section 1(2)(a) of the Robbery and firearms (Special Provision) Act Laws of the Federation of Nigeria, 2004.

“That you Sodienye Mbatumukeke ‘m’ and Excell Divine Naabe ‘m’ on the same date and place in the aforementioned Magisterial District did conspire amongst yourselves to commit felony to wit: murder and hereby committed an offence punishable under section 324 of the Criminal Code Cap 37 Vol II Laws of Rivers State of Nigeria 1999.

“That you Sodienye Mbatumukeke ‘m’ and Excell Divine Naabe ‘m’ on the same date and place in the aforesaid Magisterial District did murder one Eleje Chukwuma ‘m’ by hitting him on the head with a mortar pestle and subsequently suffocated him by covering his head with a polythene waste nylon bag before tying him with a cable wire which caused his death and thereby committed an offence punishable under section 319(1) of the Criminal Code Cap 37 Vol II Laws of Rivers State of Nigeria 1999.”

When the matter was mentioned the Presiding Magistrate, Chief Magistrate Amadi O Amadi-Nna, said the court lacked jurisdiction to entertain the matter due to the gravity of offence.

The chief magistrate adjourned the matter sine die and informed that he would send the case file to Director of Public Prosecutions (DPP) for advise.

He, however, stated that the suspects can seek bail at the state high Court. There was no defense counsel for the accused persons.

The third accused person, a female, Joy Eluwa, was not brought to court for arraignment.