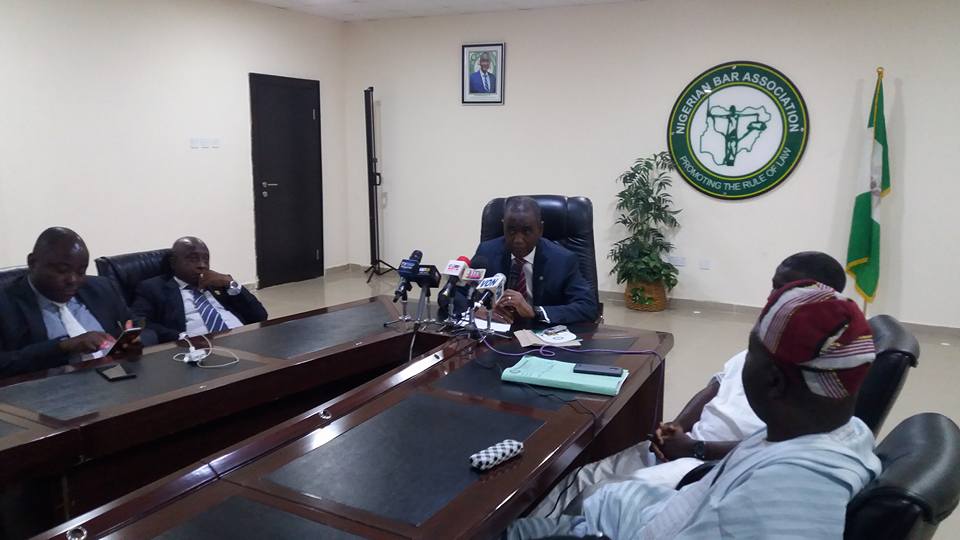 The Nigerian Bar Association on Monday called on the Federal Government to call off the investigation of judges who are facing corruption charges to enable them return to their duties. The NBA made this call in its Democracy day press briefing in Abuja.

The NBA chairman amongst other issues also demanded the immediate release of the immediate-past National Security Adviser, Col. Sambo Dasuki (rtd), and the leader of the Islamic Movement of Nigeria, Sheik Ibrahim El-Zakzakky.

Both men have been in the custody of the Department of State Service since December 2015 despite various court orders directing the Service and the Federal Government to release them.

He said, “The NBA wishes to use this opportunity to call on the Federal Government to continually demonstrate religious adherence to the tenets of constitutional democracy. In this regard the NBA is appalled at the continued detention of certain individuals in blatant disobedience to court orders.

“Amongst these individuals are Sheik Ibrahim El-Zakzaky and his wife and also Colonel Sambo Dasuki, the former national security adviser. Whilst we recognise the serious the charges on which these individuals are held, we nevertheless view their continued detention as unjustified and contrary to the express court orders.

“We call on the government to without further delay respect these orders.”

Calling on Government to terminate investigations against judges who were accused of corruption but have not been charged before the court for the past eight months the NBA said;

“The NBA calls on the government to terminate the investigation against those judges to enable them resume their work as judicial officers”.

On the agitation for succession by some groups in the country, the NBA called for a better way of showing grievances aside the threat to break up. “NBA affirms commitment to unity and building a strong federal system. We urged all groups to continue to agitate peaceful existence among citizens of the country.”

On  security, the NBA commended the federal government especially in the fight against Boko Haram in the north­east and the recent release of 82 Chibok girls.

Speaking on the anti­corruption crusade of the government, the lawyer noted that, “efforts of anti­ corruption agency is commendable. New anti­corruption strategy has been developed. Stakeholders should help the FG towards the success of the policy. We commend whistle blower policy.

The government should fund the anti­ corruption agencies. “The lingering issue of EFCC leadership should be tackled once and for all. The investigative agency should be more careful and thorough in carrying out its investigation. Media investigation should not be encouraged”.