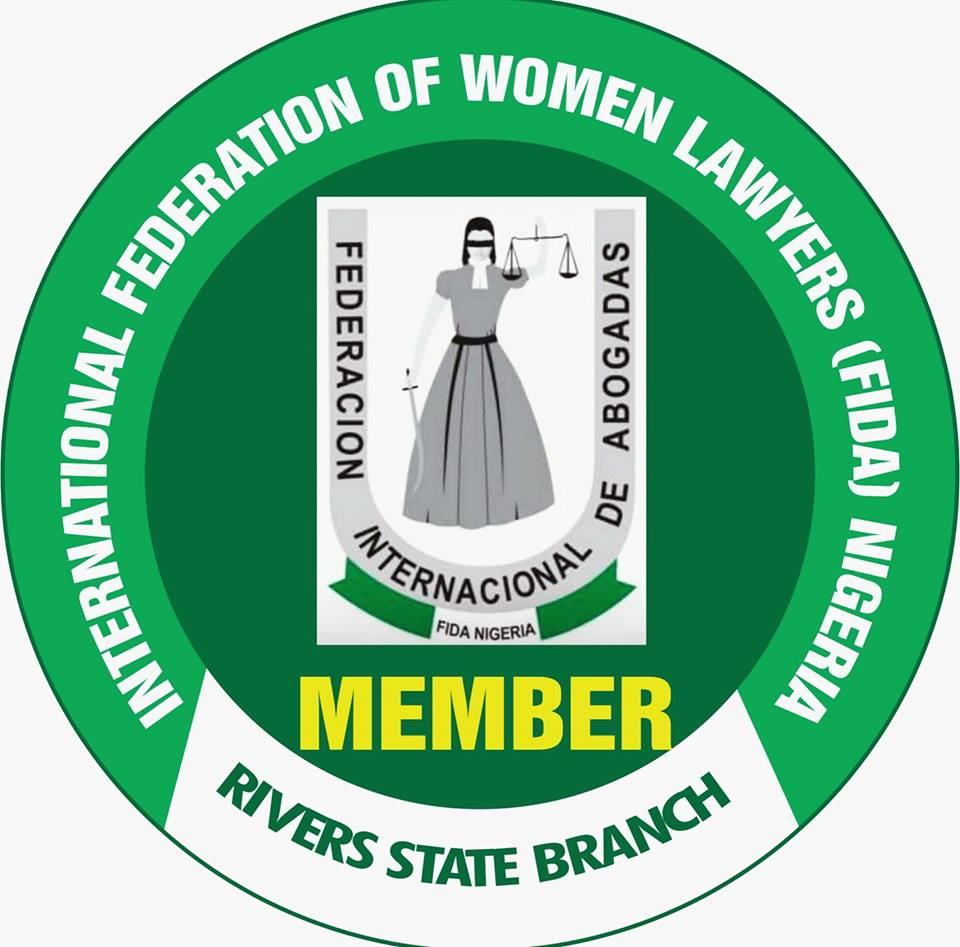 As part of the activities lined up to mark its 30th Anniversary, the International Federation of women Lawyers (FIDA) Rivers State Branch has issued a press statement reiterating her commitment to stand against all forms of violence against women and children. the 30th Anniversary celebration has the team, Raising the Bar in the Promotion of the Rights of Women and Children.

Speaking at the Association’s secretariat, the Chairperson of the Branch Mrs. Tonia Osademe noted that Violence, not only reduces the dignity of a woman, but also deprives her the capability to contribute and maximize her full potential in nation building.

Mrs Osademe also highlighted some of the achievements of the Association in the areas of Free legal services, counselling, free legal representations in court, humanitarian services, career building, mentoring and women empowerment through establishment of small scale businesses. She commended the support of the Rivers State Government in ensuring that the objectives of FIDA Rivers State is achieved.

Read the press statement below:

PRESS STATEMENT: FIDA RIVERS REITERATES HER STAND AGAINST ALL FORMS OF VIOLENCE AGAINST WOMEN AND CHILDREN AS SHE CELEBRATES HER 30TH ANNIVERSARY WITH THE THEME RASIING THE BAR IN THE PROMOTION OF THE RIGHTS OF WOMEN AND CHILDREN.

The International Federation of women Lawyers (FIDA) Nigeria is a Non-Political, Non-Governmental, Non-Profit and Non- Religious association of women called to practice law in Nigeria. Her primary aim is to Promote, Protect and Preserve the Rights of Women and Children. FIDA Nigeria has branches in 33 States of the federation.

FIDA RIVERS is a branch of FIDA Nigeria inaugurated in the State on the 18th of May, 1987. FIDA Rivers has since inauguration, been in the forefront of campaigns, advocacies, legal aids and proposing legislations in the promotion, protection and preservation of the rights of women and children. We have through our campaigns, sensitizations and advocacy visits to communities and relevant authorities optimistically improved the lives of citizens and residents of the state especially women and children who in all facet of life suffer diverse degree of violence and dehumanizing practices.

FIDA RIVERS STATE BRANCH, in very stern voice, decries ALL FORMS OF VIOLENCE AGAINST WOMEN AND CHILDREN IN RIVERS STATE as Violence, not only reduces the dignity of a woman, but also deprives her the capability to contribute and maximize her full potential in nation building.

Violence against women and children are serious crimes that have serious impact on our economy, health services and criminal system. Protecting the Rights of women and children, supporting victims and survivors of violence in the state remain the PRIORITY of FIDA RIVERS. Every woman and child deserves to live a violence free life.

We have through our advocacy visits, with great support from the Rivers State Government, influenced the signing into law legislations that affect women in the State these include but not limited to, Laws on Dehumanizing and Harmful Traditional Practices 2003; Abolition of Female Circumcision 2001; Reproductive Health Services 2003 and Child Right Law 2010.

We note with great concern the need for an intervention centre (SAFE HOME) where victims of violence can temporarily be rehabilitated, counselled while their matters receive adequate attention.

We also commend the efforts of the State Judiciary for speedy dispensation of Justice but call on our able and result oriented Chief Judge for the establishment of a Family Court in the State.

We also call on the Rivers State House of assembly to adopt into Law the Violence Against Persons Prohibition Act (VAPP). These legislatures will ensure speedy dispensation of Justice and also offer great recompense for victims.

As we celebrate our 30 years of service to humanity in Rivers State, we, call on all stakeholders and the society at large to join our campaign to SAY NO to all forms of violence against women and children by speaking out and pressing on, until justice is achieved.

Finally, we thank our partners, especially the Rivers State Government who have in all circumstances stood by us in ensuring that women and children enjoy a violence free life in Rivers State.

NBA Ikorodu Tasks Lagos AG on the Independence of the Judiciary

19-Year-Old Sentenced to Death in Ekiti for Armed Robbery