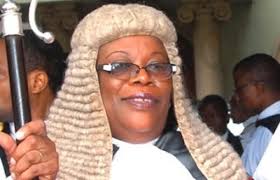 The Lagos Chief Judge Justice Olufunmilayo Atilade was today prevented from passing through the enterance to the Lagos State Government House by women who stormed the Government House during a peaceful International Women’s Day march in Ikeja, the state capital.

The women in their hundreds were led by Dr Joe Okei-Odumakin, the convener of Women Arise group, and where at the Government House to speak with the governor and deliver their message to him about women’s oppression as the world celebrated Women’s Day.

The women were denied access into the Governor’s office by security operatives attached to the governor’s office. A confrontation between the protesters and the security men left one of them injured.

It was reported that people were initially tear gassed when the scene was becoming quite violent, but the people refused to leave the entrance to the state house in Alausa, Ikeja.

They proceeded to the Lagos State House of Assembly to meet with the Speaker. On their way to the Assembly complex,  the protesters prevented the Lagos Chief Judge’s car  from passing through insisting that as a woman, she should alight from the vehicle to address the teeming women.

All efforts by the CJ’s security details to appeal to the protesting women to kindly allow the CJ’s car access was rebuffed, the protesters who were not mindful of the rain remained adamant while insisting that there was no thoroughfare for the CJ if she does not associate with the women.