Home News 12 States Pass Not Too Young to Run Bill 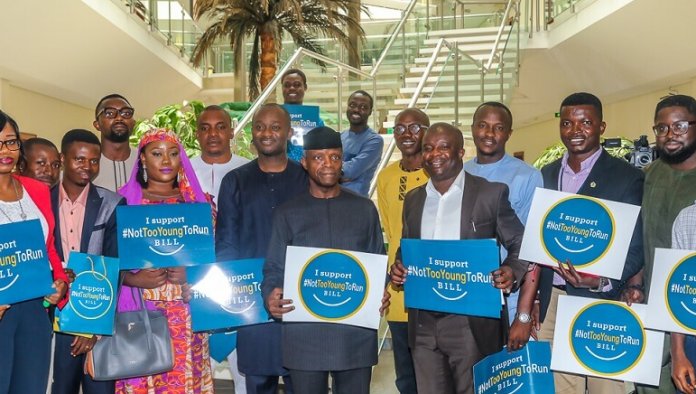 The National Coordinator of the  and convener of The Not Too Young To Run Bill, has disclosed that 12 states have so far passed the bill in their various states assemblies.

He disclosed this in an interview in Abuja during the Night of Impact organised by the Young African Leadership Initiative to highlight their performance in 2017.

He said more work needed to be done as the issue is a constitutional matter, which requires the passage of 24 states Houses of Assembly.

According to him, “There was a lot of work that went into it in actually achieving success with the bill. We identified other organisations that shared similar values with us especially around youth participations, youth inclusion and youth representation in governance.

“We worked together with the National Assembly through Hon. Tony Nwulu, who sponsored the bill in the House of Representatives and Senator Abdulaziz Yanko, who sponsored it in the Senate. We also identified young people in each state of the federation and train them as coordinators and shared with them the values we had as a campaign. They went back and were carrying out state engagements and since that happened we can see that the National Assembly passed the bill in July 2017.”

He disclosed that 12 states had passed it out of the 24, which is constitutionally required to make a law, adding that to make sure that it meets the constitutional requirement they are working with other state coordinators and state assemblies to ensure that they pass it.

According to him, the states that had passed the bill include, Adamawa, Benue, Delta, Ekiti, Enugu, Gombe, Katsina, Kwara, Nasarawa Ondo and Yobe; while Kano State had referred it to public hearing. Taraba  was said to have voted against it.

He added that once this is achieved, the next stage would be the “Ready to Run”, which involves capacity building for young people towards the 2019 general election.

“The next stage for us is Ready to Run; it is a capacity building for young men and women who wants to contest elections in 2019. So, yes we are targeting the 2019 general elections; we are not just waiting for subsequent elections.”

Mr. Ovo Otarigho, the Abuja coordinator of the group, who is also the Executive Director, Impact Driven Young Leaders Initiative, said that the group is an initiative of the government of the United States of America, which came into existence under the Barack Obama’s administration.

He said the organisation is also promoting anti-corruption among young people in Nigeria for them to be better people in their communities as this is what YALI believes.

“We are also promoting anti corruption among young people because we believe that if young people can help spread the campaign it will bring dividends of democracy and  good governance.

“We also have a project which is known as open government campaign whereby we get young people to pledged not to loot when they get into public office, not to be serious at work and also to be the best they can be. Because if we all are the best that we can be; Nigeria will be a better place all of us.”