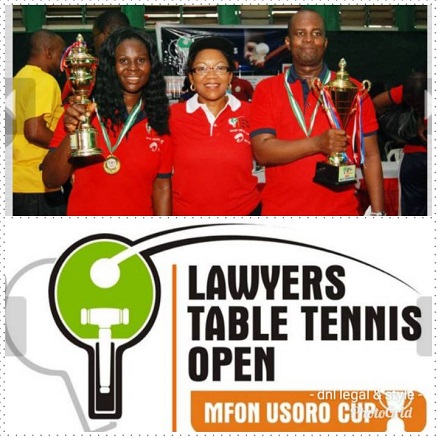 Registration is now open for the 2018 Lawyers Table Tennis Open ( Mfon Usoro).According to Cynthia Mafolomi representing the organisers in a press statement, the 2018 season will be the 10th Anniversary of the event which began officially in 2009 and shall be dedicated to creating awareness on Prostrate and Ovarian cancer.

The 2017 edition was dedicated to work stress and an aerobic session was organised for Lawyers who attended the event.

The finals is slated for 22nd of September 2018 at the Nigerian Table Tennis Federation Hall, National Stadium, S/Lere, Lagos at 10am
The 2017 event was remarkable because Titilayo Osagie who has been winning the female category since 2010 was toppled by Yetunde Martins in a hot final match that kept the spectators holding their breath.

The registration link is on http://lawyersgames.com/register.html and contact number as 08154894478