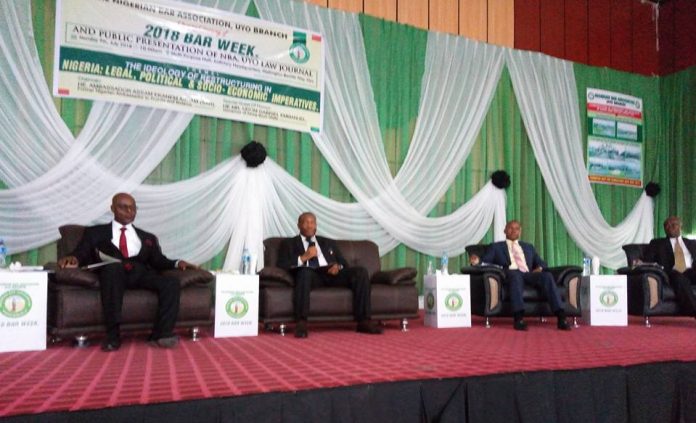 The Akwa Ibom State governor, Mr Udom Emmanuel has directed the Ministry of Justice to establish voting centers for lawyers practicing in the state to vote at the 2018 Nigerian Bar Association election. The State Attorney General and Commissioner of Justice, Mr Uwemedimo Nwoko disclosed this during his goodwill message at the opening ceremony of the 2018 Bar Week of the Uyo branch of the Nigerian Bar Association.

Mr. Nwoko, who had earlier aligned with the call by former Ambassador to Russia, Assam Assam SAN, for all lawyers in the state to vote their own, said that the governor’s instruction would be followed through to ensure that Mr Usoro is elected as the next NBA president.

In his speech, the state deputy governor, who represented the governor, Mr. Moses Ekpo, decried the type of political structure in use in the country. Saying that the present structure has been a major set back to the development and advancement of the country. He called for a proper restructuring to ensure a country founded on equity, democratic principles, fiscal democracy and security guarantee.

Earlier, the Chairman of Uyo branch, Eno-Obong Akpan, Esq, had thanked the state government for always standing by the Bar in the state. She urged the state government to assist the Bar complete its Bar Center project going on in the state. She thanked guest speakers, elders and stakeholders of the Bar and members for turning up for the opening ceremony and urged them to take active part in all the other activities lined up for the week.

ALSO READ   As Hon. Justice Clara Ogunbiyi Bows Out of the Supreme Court

in attendance at the opening ceremony include, Judges, Professor Ernest Ojukwu, an NBA presidential aspirant, Jonathan Taidi, Secretary General aspirant as well as Arch Ezekiel Nya-Etok, who presented the lead paper on “The Ideology ignored Restructuring in Nigeria: Legal, Political and Socio-Economic Imperatives”.