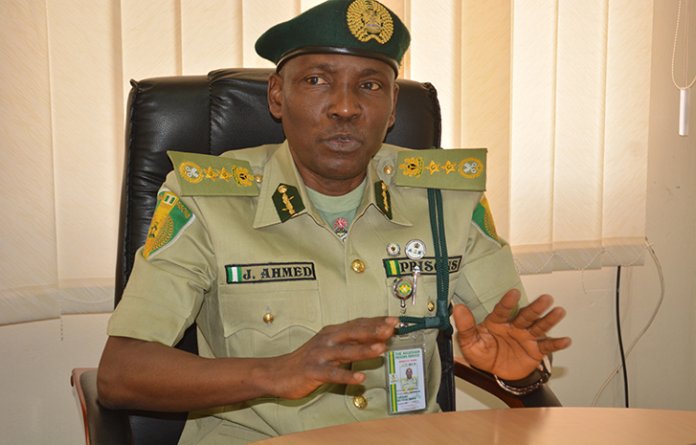 We told you earlier how 57 year old lawyer and member of the Nigerian Bar Association (NBA) Gombe Branch Mr. Joseph Kolchi, was severely beaten by Prison Warders attached to Gombe Prison when he went to visit his client at the Prison. Read here

Mr. Kolchi a lawyer of 30 years post-call, has written to the Comptroller of Prisons requesting for an investigation into the matter. He also threatened to institute legal action against the Nigerian Prison Service should they ignore his demands.

In a letter written by his lawyers, Taufiq Law Office captioned “Letter of Demand/Pre-Action Notice” Mr. Kolchi made several demands from the Nigerian Prison Service

Read the letter below:

We are solicitors to Mr. Joseph Kolchi, Esq. of J. Kolchi & Co., Abubakar Habu Hashidu Way, Near the Central Round-About, Gombe, Gombe State. We shall herein refer to him as “our client” and we act on his instructions.

Our client informed us and we verily believe him that he is a legal practitioner of 30 years post-call and he has practised all this while in Gombe except for the period he underwent the mandatory national service. He is one of the pioneer members of NBA Gombe Branch. He further informed us that in course of his legal practice he has visited the Prisons and Police Stations in Gombe State and elsewhere more than one thousand times without having any problem.

He further informed us that on 16th August, 2018 he went to Gombe Prison to visit his client that is one of the awaiting trials there. Our client was in company of one Ayuba Iliya. When they reached the first road block on the road leading to the Prison, our client introduced himself and told them the purpose of his visit. The Mobile Police and Prison Security Guards directed him to proceed. He repeated the same procedure at the second road block. He was directed to proceed to the gate and knock and introduce himself to the officer manning the gate. When he reached the gate he introduced himself and informed the officer manning the gate that he wanted to see his client. That officer refused to open the gate but informed the Welfare Officer who came and directed the gateman to allow our client in.

Our client further informed us that when he entered the Prison one officer (ASP I Musa Haruna) shouted at him asking about his mission. He introduced himself again and told him he was there to see his client. The officer said that he did not care whether our client was a lawyer he would not be allowed to see his client. Our client told him that he was not there for fight. At that point the officer abused our client calling him stupid. Our client replied that it was nonsense for the officer to behave in that manner.

The altercation drew attention of other officers. Then CSP Shamgar Dauda called for the attention of our client and he was  ushered into an office opposite that of the Deputy Comptroller of Prison (the officer in charge of the Prison). Our client introduced himself.  Then CSP Dauda asked him what he wanted. Our client told him that he was there to visit his client but that ASP I Haruna wanted to prevent him without any explanation. CSP Dauda said that he only wanted to know purpose of the visit. Our client stated that his mission was to see his client and proceeded to narrate to the said CSP Dauda what ASP I Haruna did. The said CSP Dauda now became infuriated because our client did not sit on a stool he offered when there were seats for visitors.  CSP Dauda then directed the Prison Warders that they should bundle out our client. The Prison Warders accordingly severely brutalized our client and carried him like a sack and threw him on concrete floor outside the gate. Then PIP I Sani Ribadu continued using his boot to match our client on his abdomen even when Ayuba Iliya was pleading that our client had just recovered from sickness.

The officers that directed and/or participated in the manhandling and abusing our client are up to ten. But the ones whose names he can recall are ASP I Musa Haruna, CSP Shamgar Dauda  and PIP I Sani Ribadu.

Our client sustained injuries as a result of the assault to the extent that he could not drive his car. He had to call Mr. P. A. Aki, Esq. who drove him to report the issue at the Gombe Division Police Station from where he was taken to State Specialist Hospital Gombe for treatment.

You may recall that a team of legal practitioners which included the Vice Chairman of NBA Gombe Branch, two past Chairmen, a past Secretary and many others proceeded to your office to lodge a complaint on the conduct of your officers. You there and then stated that even a prison inmate did not deserve such treatment. You also undertook to investigate the issue. However, instead of addressing the issue of our client, the authorities in Gombe Prison are busy introducing harsh policies on visit to the Prison by legal practitioners. The Prison is a public institution. Therefore, the right of the Prison inmates to be visited by their lawyers is both constitutional and statutory. It is not and can never be a privilege at the discretion of the Prison Officers.

We hereby inform you that our client has categorically rejected the report of your committee issued on 7th September, 2018. It is against the rule of natural justice as enshrined in Section 36 (1) the Constitution of Federal Republic of Nigeria, 1999 as amended (the Constitution) for the Prison Officers to be Judges in their own case. Therefore, we demand for the following:-

Take notice that if our demands are not met within 30 days from the day you receive this letter; we will be compelled to commence legal action against the Nigerian Prison Service and the affected officers to demand for enforcement of fundamental rights of our client, declarations, injunctions and damages for the acts of the Prison Warders and Officers which the Prison Authorities appear to be condoning and protecting.

Take further notice that this letter is without prejudice to whatever the NBA is doing or will do on the issue.

Communique Issued by NBA at the End of 58th AGC, Pre-Conference...