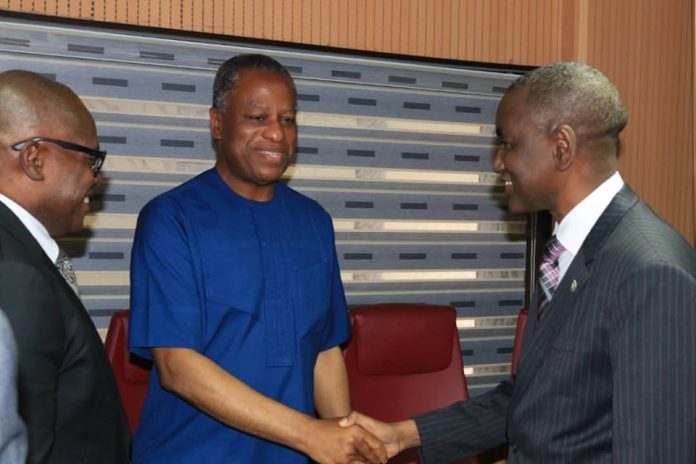 The Honourable Minister of Foreign Affairs; Mr. Geoffrey Onyeama has said the Ministry will support the Nigerian Bar Association (NBA) to ensure a successful Annual Bar Conference in August.

Mr. Onyeama made the pledge when members of the NBA led by the NBA President Abubakar Balarabe Mahmoud, OON, SAN, the Chairman Technical Committee on Conference Planning (TCCP) Mr. George Etomi FNIALS, visited the Minister in his office, in Abuja.

Speaking during the courtesy call, the NBA President began by informing the Honorable Minister of plans for the Nigerian Bar Association Annual General Conference which have since commenced in earnest. “As you may be aware, the NBA Conference is an annual feature on the calendar of the Nigerian Bar.” He said; “This year we have invited some world leaders, thought leaders and influencers including His Excellency, Nana Akufo Addo, President of the Republic of Ghana and Cyril Ramaphosa; President of South Africa.

He therefore, solicit the support of the Honorable Minister and guidance in handling protocols and logistics for the invited guests so as to have a seamless and successful Conference.

He enthused on the theme of the Annual General Conference; “Transition, Transformation and Sustainable Institutions” which is focused on how transitions are handled in critical spheres of human endeavours and the strength of institutions to withstand the shocks that may be incidental to that change.

He noted that, the NBA has started a tradition of excellence by broadcasting the conference live on a dedicated DSTV channel and other international media outlets like CNBC and will continue to uphold that tradition.

He concluded by saying that after the conference, the NBA will produce policy documents which will then be forward to various stakeholders.

In his remarks, the Chairman Technical Committee on Conference Planning (TCCP) Mr. George Etomi noted that the Annual General Conference is arguably the largest gathering of lawyers anywhere in the world, and it not only gives lawyers and legal professionals the opportunity to discuss continuing professional development but also provide lawyers with the forum to discuss topical national issues as well as network, and share ideas and experiences.

He noted that this year, they are expecting over 10,000 delegates across the continent and urge the Honorable Minister to assist in visa processes so that international delegates will have a seamless process on arrival.

He informed the delegation that a Nigerian was recently elected to the African Court on Human Rights, but Nigeria is yet to recognized the jurisdiction of its board and urge the bar leadership to advocate for not only its recognition but also enforcement with respect to the ECOWAS court to ensure Nigerians have their right protected where they get judgments in courts where Nigeria is a signatory to it.

On a final note, he assured the delegation of his ministry utmost support.