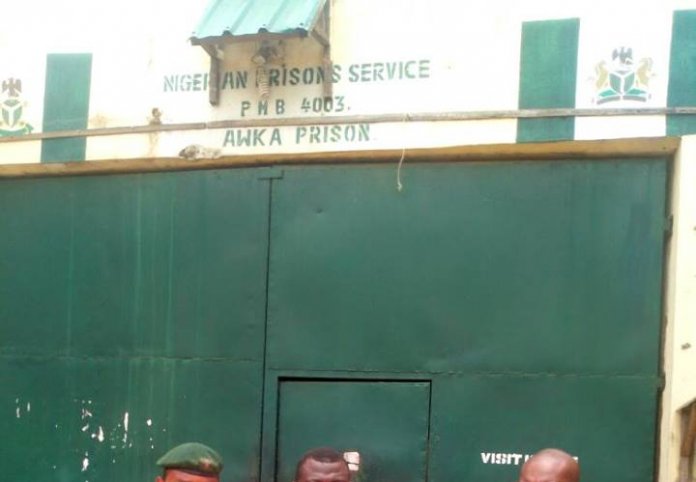 Mr. Emmanuel Nwakaeze, Controller of the Anambra Command of the Nigeria Prisons Service (NPS) says that seventy-eight percent of the inmates in prisons around Anambra State are still awaiting trial.
The controller said 1,574 inmates out of the 1,761 inmates are awaiting trial for various offences.

He said those affected were spread across the four prisons in the command’s control, adding that only 48 of them are females.

The Controller said that the Awka prison houses 374 inmates; Onitsha Prison has 887 inmates; the Nnewi Prison has 282; and the Aguata Prison has 218 inmates and 65 percent are citizens of Anambra.

He said that inmates, who had paid the fine options of their punishment or served their jail terms were released by either the state governor or Chief Judge between December 2017 and March, 2018.

“Other are still awaiting conclusion of their trial and so they still have to remain in prison custody until the court pronounced otherwise,” he said.

Mr. Nwakaeze further disclosed that 30 inmates had been condemned since he assumed office in Anambra command.

On the allegations that prison officials extorted money before taking inmates to court, Mr. Nwakaeze said that it was absolutely impossible for the story to be true.

According to him, no prison official will ever extort money from prisoners for any reasons whatsoever under his watch.

On the welfare of inmates in the state command, the Controller said congestion is the major challenges to the command because it create room for unhealthy environment that can lead to outbreak of cholera, tuberculosis and other related killer diseases.

The official appealed to the State Governor, Chief Willie Obiano, NGOs, philanthropists and others to provide the command with waste disposal tanks for, electric transformer, ambulances and other lifesaving amenities.

“We have few vehicles that take them to court and bring them back as at when due. We also have few clinics that look after the sick ones among them, so am appealing,” he said.