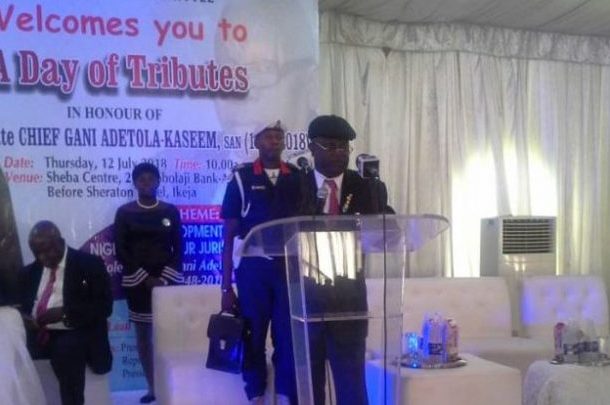 President of the National Industrial Court of Nigeria (NICN), Hon. Justice Babatunde Adejumo OFR has lauded the effort of the late jurist, Chief Gani Adetola-Kaseem SAN, for his numerous sacrifice and remarkable role in the development of Labour Law Jurisprudence both in Nigeria and Africa as a whole. His Lordship, Hon. Justice B. A. Adejumo who served as the chairman of the occasion stated that late Adetola-Kassem’s contribution to the realization of the Third Alteration Act of the 1999 constitution that conferred exclusive jurisdiction on labour and employment matters on the National Industrial Court of Nigeria (NICN) thereby enhancing social justice and economic development cannot be quantified.

“He contributed significantly to the realization of the National Industrial Court of Nigeria as a superior court of record today pursuant to the Third Alteration Act of the 1999 Constitution. History will forever be kind to him” Justice Adejumo eulogized.

The NLC President, Comrade Ayuba Wabba in his tribute to the late icon, spoke about the late Gani Adetola-kaseem’s doggedness and relentless sacrifice to the growth of the labour union in Nigeria, for offering of pro-bono services to the union. He described ‘SAN’ as fondly called, as a strong advocate of internal dispute resolution mechanism. His wise counsels were invaluable in both legal and general affairs of life.

“SAN used his intellect and legal skills for the services of the union and in the course of such efforts he has won many landmark cases that enhanced our jurisdictional scope, saved our union from being balkanized by some wolves who masqueraded as union leaders.” Say Wabara.

The Lead speaker, Prof Hakeem A. Olaniyan in his testimony described the late jurist as a thoroughbred and unassuming professional who contributed in no small way to Nigerian law and jurisprudence. “The late Chief Gani was an example of loyalty and fidelity to the nation; he worked tirelessly to build bridges across many lines; he epitomizes integrity and thorough selflessness.” On his part, the Presiding Judge of the NICN Lagos division, Hon. Justice B. B. Kanyip, in his remark; commiserated with the family of the deceased, and described the late jurist as a brilliant senior advocate who always align himself with the truth.

Late Chief Ganiyu Adetola-Kazeem SAN born in 1948, died on Monday 8th January, 2018, and has been buried according to the Islamic rites in his home town Ijebu-Ode.

The late jurist would be remembered mostly for his exploits in Labour law, Medical law and Islamic jurisprudence. May Allah forgive his shortcomings, pardon his mistakes, accept his efforts and admit him into Paradise (Amin).