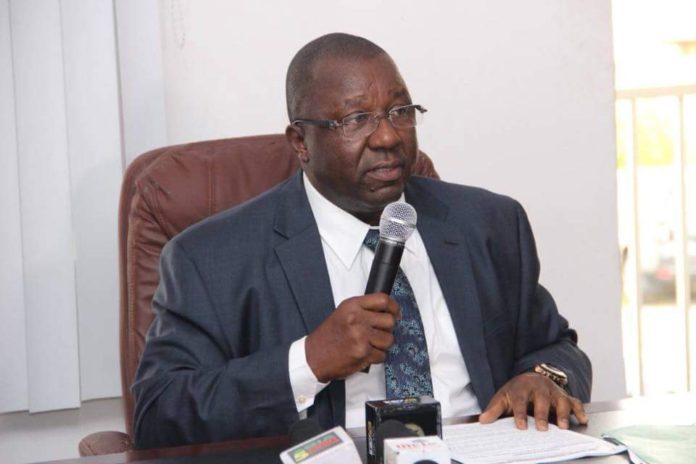 The Abia State government has indicated its willingness to accept the conditions set out by the National Judicial Council on the crisis rocking the State’s Judiciary.

The above was contained in a press statement titled “IMPASSE IN THE LEADERSHIP OF THE ABIA STATE JUDICIARY – ABIA STATE GOVERNMENT POSITION” issued by the Attorney General and Commissioner for Justice Abia State Chief Umeh Kalu SAN on Monday, 5th February, 2018.

Abia state and it’s judiciary has within the past one (1) week enjoyed prominent position in national news coverage.

First was the Abia state House of Assembly’s Resolution suspending the state Chief Judge – Hon. Justice Theresa Uzokwe – pending the hearing conclusion of a petition sent to the House bordering on acts of tyranny, infamy, gross misconduct and incompetence.

‘The House Resolution was complied with by the Governor resulting to the swearing – in of Hon. Justice Obisike Orji as Acting Chief Judge.

On Wednesday, the 31st day of January, 2018, the National judicial council held an emergency meeting wherein it came out with its Resolution describing the House of Assembly Resolution, the suspension of the Chief Judge and the swearing in of Justice Obisike Orji as illegal and unconstitutional.

The National judicial council further advised the state government to swear in Hon. Justice O.A.K Ogwe who is the next most senior judge after Hon. Justice Obisike Orji, as Acting Chief Judge.

The Aforementioned events have expectedly elicited commented and opinions on the powers of the house of Assembly to investigate complaints and recommend the suspension of the Chief Judge of the state, having regard to sections 36, 128,292 (1) (a) (ii) and paragraph 21 of the Third schedule of the 1999 Constitution of the Federal republic of Nigeria (as amended).

Legal arguments have equally been canvassed on the non-adherence to the supreme Court decision in Justice Elelu Have V. A. G Fed. & Ors., Wherein the supreme held that the Chief Jugde of a state cannot be removed without input from the National judicial Council.

Prominence has equally been given in legal arguments on the propriety or otherwise of the National judicial council’s Resolution which described the act of the House of Assembly and the Governor in suspending the Chief Judge as illegal and unconstitutional. Some legal proponent argue that only a court of law properly constituted can pronounce propriety or otherwise of an administrative action.

While the National judicial council might not be a Court of law, the Abia State Government is not unmindful of the constituents of that revered Assembly of our eminent and most knowledgeable in our laws and it’s interpretation.

The Abia state Government remains committed to the rule of law and strict adherence to the provision of the Constitution of the Federal Republic of Nigeria, which document has made ample provisions guiding and regulating the conduct of our public affairs.
The Abia state House of Assembly, the Governor of Abia state, the Abia state Judicial service Commission and the National judicial Council have specific roles assigned to each of them in the emergence of a State High Court Judge and the Chief Judge.

We are of the firm view that our respected House of Assembly reserves the power to entertain and investigate Petitions sent to it and come up with their findings, while the National judicial council remains the sole body constitutionally empowered to effect disciplinary measures on judicial officers.

The sole disciplinary powers on judicial officers which the National judicial council enjoys, in our mind is to maintain the sanctity and Independence of that important arm of Government and to further shield the judiciary from the vagaries of political machinations.

The Abia State Government has elected not to be mired in the present controversy or legal issues been thrown up in our national discourse over the propriety or otherwise of the actions taken so far in this matter by our highly respected House of Assembly and the National Judicial Council.

What is upper most in our mind, presently, is good governance to the people of Abia state, which equally means enhancing Justice delivery to the citizens of the state in an atmosphere devoid of rancor, bickering, high handedness and maladministration that has characterized our Judiciary in recent times.

The National Judicial Council remains a veritable and important organ in the Justice administration in this country whose partnership with the Abia state government in enthroning best practices in our Justice administration is not in doubt. We cannot therefore jettison but embrace and abide wholeheartedly the wise counsel of these eminent Twenty-five (25) men and women constituting the Council.

In Light of the for going, and , having received a formal communication from the National Judicial Council on their Advice towards resolving the IMPASSE over the leadership of the Abia State Judiciary, Government will within the next few hours conclude arrangements towards the swearing in of Justice O.A.K Ogwe as Acting Chief Judge of the State, in line with the National Judicial Council’s recommendations.”

A new CJ has been appointed in line with the NJC’s directive as indicated above.