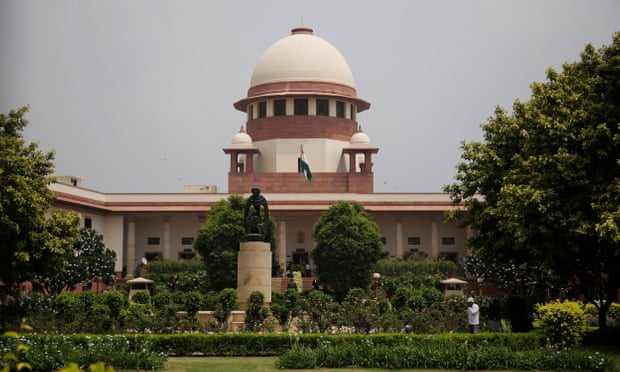 India’s top court has ruled that adultery is no longer a crime, declaring that the colonial-era law is unconstitutional and discriminatory against women.

A five-judge bench of the supreme court unanimously ruled that the criminal offence of having a sexual relationship with a woman without her husband’s consent was archaic and deprived women of agency.

Those who brought the case had sought to have section 497 of the Indian penal code made gender neutral. But the court said the law, which attracted a prison sentence of up to five years, was arbitrary and needed to go.

“It is time to say husband is not the master,” the chief justice, Dipak Misra, said. “Legal sovereignty of one sex over another is wrong.”

“Society has two sets of standards for judging the morality of men and women,” said another judge, Dhananjaya Chandrachud. “The law is gender biased, gives unequal voice to partners.”

The decision is one of several socially progressive cases considered by the court this session. Earlier this month the justices ruled to decriminalise homosexuality, and will soon decide on a case about whether women in their menstruating years can be restricted from entering Kerala state’s famous Sabarimala temple.

Like the decision to legalise homosexual acts, some advocates against the adultery law characterised Thursday’s decision as an act of decolonising the country’s Raj-era criminal code.

“I welcome this judgment by the supreme court,” said Rekha Sharma, the head of India’s National Commission for Women. “It was an outdated law, which should have been removed long back. This is a law from British era. Although the British had done away with it long back, we were still stuck with it.”

Lawyers for the central government had opposed scrapping the law, arguing that diluting sanctions against adultery would “result in laxity of the marital bonds”. The law had survived three previous legal challenges, the most recent in 1988.

The Delhi high court is considering the legality of another law that makes an exception for sexual assault if the perpetrator and victim are married. The government as well as several men’s rights groups have filed petitions against scrapping the marriage exception.