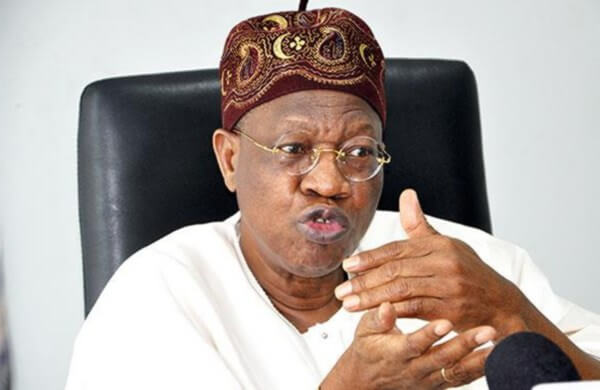 Justice Mohammed Aikawa of a Federal High Court sitting in Lagos has been asked to dismiss a motion filed by a former Minister of State for Finance, Mrs. Esther Nenadi Usman, seeking to commit the Information Minister, Alhaji Lai Mohammed, to prison for alleged contempt.

The Economic and Financial Crimes Commission (EFCC) made this submission yesterday, at the resumed trial of Mrs. Usman alongside a former Minister of Aviation, Chief Femi Fani-Kayode, one, Danjuma Yusuf and a company, John Trust Dimensions Nigeria Limited, on a 17-count charge of alleged N4.6 billion fraud.

The EFCC, in the charge marked FHC/L/C/251c/2016, accused the defendants of conspiracy, unlawful retention of proceeds of theft and money laundering.

Mrs. Usman had in a motion on notice filed through her lawyer, Chief Ferdinand Orbih (SAN) argued that the inclusion of her name on the looters’ list released by the information minister during the pendency of an alleged fraud case against her is contemptuous.

The former minister added that Lai Mohammed’s action is an attempt to prejudice the mind of the public against her in the case pending before the court.

“There was nothing that connects the ministry of information to the motion which was taken out to annoy the prosecution. The motion is lacking in substance, it is an abuse of court’s process and should be dismissed”, Oyedepo submitted.

Earlier, Nenadi’s lawyer, Chief Orbih (SAN) while urging the court to grant the motion alleged that the information minister had by his action pre-judged his client’s case before the court.

“The information minister’s action undermines the integrity of the court and is aimed at poisoning the mind of the public against the applicant.

“Assuming at the end of proceedings, the defendants were cleared of the alleged offence, the integrity of the court will be put to rest owing to the information minister’s action.

Justice Aikawa has however reserved ruling on the motion to November 16, 2018.

Appointment of Court of Appeal Justices: I have No Preferred Candidates – Dongban-Mensem

Emperor Ogbonna Gets N2m Bail After Being Detained For Five...