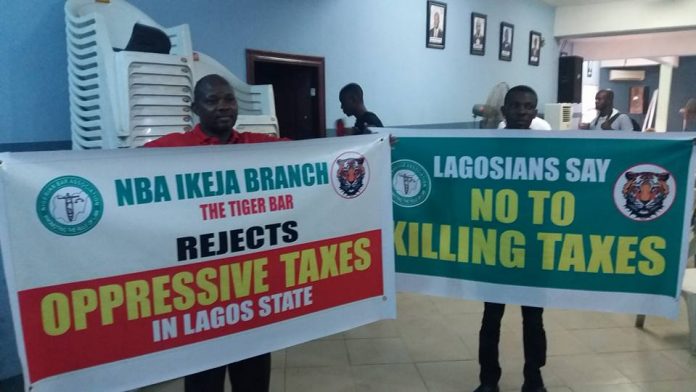 Chairman of the National Conscience Party (NCP) Lagos Chapter Mr. Fatai Ibu-Owo has said the party stands in solidarity with the Ikeja Branch of the Nigerian Bar Association (NBA) on  its  protest against what he calls “criminal” and “obnoxious” hike in Lagos State Land Use charges starting tomorrow Tues March 13 2018 at Ikeja.

The NCP definitely will be part of the movement and mass opposition to the reckless and criminal agenda of the APC government in Lagos. It is important to note that it is now 19 years of APC reckless and corrupt reign in Lagos and the consequences can easily be classified as sorrows, tears and blood.

We are quite confident that more mass organizations of the masses in Lagos are bound to join in the movement against this criminal HELL TAX and the other monstrous price increments on public utilities by the APC regime of Akinwunmi Ambode.

No doubt, mass pressure against this APC regime and its exploitative programs would continue grow, as the consequence of the over 450 percent increment in land use charge is felt by the public. The NBA Ikeja Branch is living to its historic responsibilities by taking up the issue.

The NCP is calling for TOTAL MASS DEFIANCE against the 450 percent hike in land use fees and the booting out of all the criminal APC stooges at the State Assembly. These so-called legislators (just 40 in number) are a mere rubber stamp of evil programs. They have always been making anti-people laws and corrupt programs. All these criminal laws are passed secretly and in minutes.

The millions of masses of Lagos never know the dates or where the public readings and debates of these laws were held. The content of the State budget is still a major secret, as we speak.

We are calling on the trade union movement to join in the mass action against numerous hikes in multiple taxes and fees in Lagos State. Today, the tolls gate fees, vehicle registration, have been hiked, so also other illegal multiple taxes imposed. Meanwhile, the wages of workers remain the same with mass majority of the people unemployed.

We will continue to assert that there is no fundamental difference between APC and PDP. They are both the parties of the elites and they both rule in the interest of the rich alone. Therefore, APC must be booted out of power like PDP in order for these insane economic attacks to stop.

We also maintain that behind these price hikes is not infrastructural development as the liars in APC claim. This is quite far from the truth. Actually, the 19 years reign of APC in Lagos is primarily responsible for the collapse in all infrastructures in the first place.

We maintain that behind these hikes is the monstrous debt burden they plunged the state and their unending appetite to loot the resources of the State using bogus projects that lack direction and quality.

Today, Lagos remains the most indebted State in Nigeria with a huge foreign and domestic profile. Today, Lagos has over 1.5 billion dollars foreign debt and over a trillion naira domestic debt. This is the true face of Lagos.

We are joining the masses of Lagos to demand for the immediate cancelation of the criminal land use fees hikes and the numerous price hikes of public utilities.