Mr. Ogunlana made the announcement after a meeting held by the NBA and the Commissioner of Police, Lagos State. 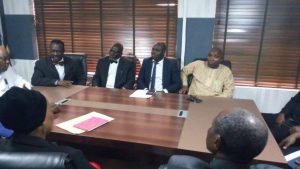 The meeting took place this afternoon for about twenty minutes from  about 3-30pm . As we insisted on our peaceful protest , the police , our good friends insisted on providing us security cover all through of our March routes , which was fine by both parties . The March starts by 9-00am.”

We are Saddened by the Invasion of Courts, NBA Lagos Secretariat...