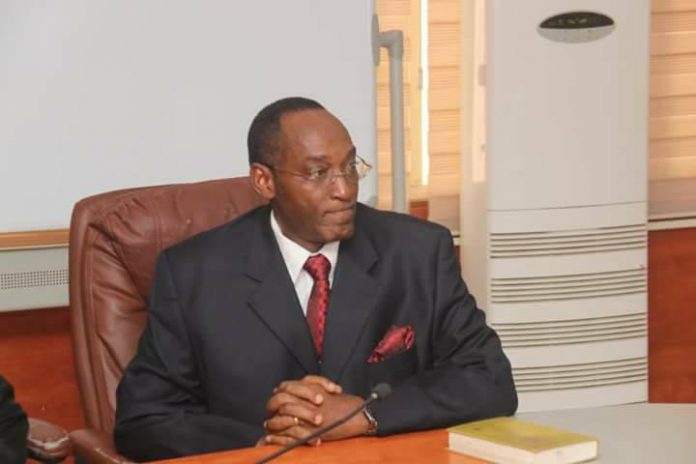 Naturally, this appointment and subsequent swearing in has elicited a variety of reactions. Some persons are of the view that the appointment was improper since the input of the National Judicial Council was not made.

Persons who hold this view are laboring under a grievous misapprehension of the clear and unambiguous provisions of the Constitution of the Federal Republic of Nigeria 1999, as amended.
Surprisingly, even some legal practitioners are trapped in this needless confusion.

Please join me as we take take this voyage into the 1999 Constitution, as amended.
Grab your pop corn.

Our first port of call is Section 292 (1) (a) (ii) of the Constitution. For clarity, I shall quote that subsection verbatim.

It provides as follows –

(ii) Chief Judge of a State, Grand Kadi of a Sharia Court of Appeal or President of a Customary Court of Appeal of a State BY THE GOVERNOR ACTING ON AN ADDRESS SUPPORTED BY TWO THIRDS MAJORITY OF THE HOUSE OF ASSEMBLY OF THE STATE.
Praying that he be so removed for his inability to discharge the functions of his office or appointment (whether arising from infirmity of mind or of body) or for misconduct or contravention of the Code of Conduct. (Emphasis mine)

I didn’t bother to reproduce paragraph (i) of the above since it deals with Federal Courts and therefore inapplicable to this situation.

What this means is that once the State House of Assembly passes a resolution removing from office, the Chief Judge of a State and such resolution is supported by two thirds majority of the members of the House, the Chief Judge stands removed once the Governor agrees. This removal can be by suspension, depending on the procedure adopted by the House.

This morning, the Governor was notified of a sitting of the Abia State House of Assembly wherein the resolution suspending the Chief Judge was passed. The State Legislature, as an independent arm of Government has discharged its assignment as specified under the constitution. That notification by the House of Assembly placed on the Governor, a serious constitutional burden which he is under a duty to discharge pursuant to his oath of office to defend and protect the Constitution. Besides, the Abia State Judiciary cannot stay without a Head.

Please note that the appointment made by the Governor is that of an Acting Chief Judge.
I shall return to this later.

ROLE OF THE NJC?

In the above situation, the National Judicial Council has no role. I shall explain.

Section 292 of the Constitution clearly specifies TWO WAYS of removing a Judicial Officer.

Subsection (a) speaks specifically to the removal of Heads of the Judiciary. It has two paragraphs.

The other Paragraph which I had earlier quoted verbatim deals with the removal of the Heads of State Judiciaries.

Therefore, for the removal of the Head of the Judiciary of a State, the Constitution doesn’t give any role to the NJC.

The role of the NJC is gleanable from Paragraph (b) of Section 292 (1) of the Constitution. Let me take the trouble and for purposes of clarity, reproduce it verbatim here.

(b) in any other case, other than those to which paragraph (a) applies, by the President or, as the case may be, the Governor ACTING ON THE RECOMMENDATION OF THE NATIONAL JUDICIAL COUNCIL that the judicial officer be so removed for his inability to discharge functions of his office or appointment (whether arising from infirmity of mind or of body) or for misconduct or contravention of the Code of Conduct.

So, this paragraph deals with JUDICIAL OFFICERS alone. You cannot, for instance, remove a Judge of the High Court without the active input of the NJC.
It’s different from that of a Chief Judge who can be removed by the Governor, once the State Assembly activates the process by passing the resolution supported by two third majority of its members.

Once a Judge becomes the Chief Judge of the State, he doesn’t just perform judicial functions alone but performs sensitive administrative functions which touch on the activities of the state government.

This explains why the framers of our constitution deemed it fit to ensure that the State Legislature can censor the activities of the State Chief Judge and if they find him wanting can activate the process of his removal from office.

For example, by the logic of the financial autonomy granted to State Judiciaries, the State Chief Judge has enormous powers over the funds of the Judiciary. Since it is the State House of Assembly that appropriates money to all departments of Government and also has oversight powers over how such funds are deployed, that power is also there to check the activities of the Judiciary.

If the State House of Assembly, under our Constitution, can lawfully impeach the Governor of the State, why would anyone be surprised that they could activate the removal of the State Chief Judge?

But because of the pride of place given to the Judiciary under our democracy, the constitution makes the process stringent. It is not easy to muster the support of two third majority of members of the State House of Assembly. Any issue that garners the support of two thirds of the members must be serious indeed. And it doesn’t end there. The Governor must act on the resolution before it can work.

As you can see, neither the Governor nor the State Assembly can remove the Chief Judge except they act together and procedurally.

So once the Governor removes the Chief Judge following the resolution or address of the State Assembly, what follows?

Section 271 (4) of the 1999 Constitution answers the question. Let me also reproduce verbatim,

Let’s see Subsection 5. It has an interesting provision.

(5). Except on the recommendation of the National Judicial Council, an appointment pursuant to Subsection (4) of this section shall cease to have effect after the expiration of three months from the date of such appointment and the Governor shall not reappoint a person whose appointment has lapsed.

What this simply means is that any person so appointed as Acting Chief Judge by the Governor can only remain in office lawfully for three months, except with the recommendation of the NJC.

Finally, once the Acting Chief Judge doesn’t exceed three months on office, his appointment remains valid and doesn’t require any input from the NJC.

Please note that in the appointment of a SUBSTANTIVE Chief Judge of the State, the Governor must make such appointment only on the recommendation of the NJC and upon the confirmation of such appointment by the State House of Assembly in line with the provisions of Section 271 (1) of the Constitution.

Onyebuchi Ememanka, Esq. is the Special Adviser to the Governor on Public Communications.