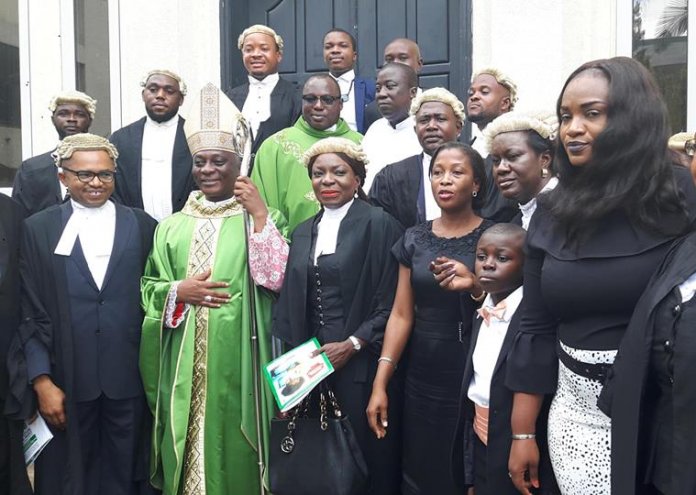 Archbishop of the Metropolitan Sea of Lagos, Dr. Alfred Adewale Martins, on Sunday, urged Catholic lawyers to always defend human rights for the common good of the society.

Martins, at the 2018 annual general meeting of the National Association of Catholic Lawyers, Lagos archdiocese, admonished Catholic lawyers to use their profession, through the teachings of the church, to influence and organise the society.

He urged the members to pay attention to issues and policies that guide education of the Nigerian child.

Speaking on 2019 elections, he said people are concerned about who would lead them into the future, and called on opinion leaders to be at alert in guiding the masses aright.

The archbishop said the lawyers also have a big role to play on how the country is governed, and in enlightening the people on what to watch out for in those seeking public offices.

“For instance, a person who said he is capable of leading the nation, must prove that by the track record that we can see; a person who is seen to be faithful to the policies and promises that have been made in the past.

“A person that will pay attention to the concerns of the people with regards to their religion, economic welfare and federal structure,” he said.

National President of the body, Mr. Chukwuma Ezeala, said the association will continue to make the work of Catholic lawyers felt in every part of Nigeria.

“We all know that we have a lot of problems in Nigeria and we are ready to face them. We have a lot of lawyers who have volunteered to take up these issues,” he said.

I am Privileged to be a Minister of Double Service –...