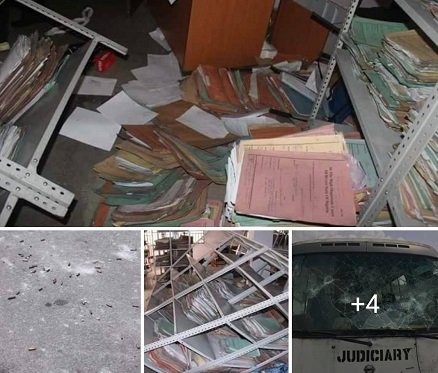 The Nigerian Bar Association (NBA) has condemned in strong terms the recent attack on the Rivers State High Court by suspected hired thugs saying same is an attempt to ridicule and undermine the integrity and powers of the Judiciary.

The above is contained in a statement by the General Secretary of the NBA, Mr. Isiaka Abiola Olagunju.

“The NBA condemns vehemently the unacceptable act of these thugs who attacked the premises of the High Court of Rivers State, Port Harcourt Judicial Division thereby destroying properties and leaving several persons injured.”

According to the NBA, the height of the attack was said to be when a sitting judge was chased out of the court premises by these thugs.”

“This act is an attempt to ridicule the judiciary and also to undermine the integrity and powers of the Judiciary and same shall not be tolerated in any manner.” Mr. Olagunju noted.

“We urge the Inspector General of Police to constitute a high powered special investigation team into the matter to ensure that all those who were involved and their sponsors in this highly reprehensible invasion of the premises of Rivers State Judiciary, Port Harcourt Judicial Division, be identified and brought to face the wrath of the law as this act is not acceptable in any civilized society.”

The NBA also used the same medium to sympathize with the Acting Chief Judge of Rivers State Hon. Justice I.A. Iyayi-Lamikanra on this act which is said to be an attempt to impede and diminish the integrity and confidence of the people in the Rivers State Judiciary.

The NBA also issued stern warning to all politicians and their aides not to involve the judiciary in whatever political mess that exists between them noting that the Judiciary is the hope of a common man, the last resort for justice and an epitome of the rule of law and as such should not be forcefully joined into the political partisanship.

“All political office holders are enjoined to settle their differences within the ambit of the law and allow justice to prevail in accordance with the already laid down court procedures.”

“At the NBA we shall continue to reiterate our commitment to peace, safety, and security of our nation, as well as preserving the dignity and respect of the Judiciary.” Mr. Olagunju said.