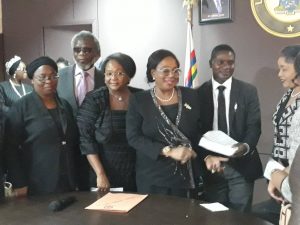 The Lagos State Chief Judge, Honourable Justice Opeyemi Oke has said the tradition of giving money to say “thank you” even for a job well done in the Lagos State Judiciary has been bastardized and stands banned.

She made this disclosure while presenting to the public, the anti-corruption flyers which were donated to the Lagos State Judiciary by the convener of the Fight Against Corruption in the Judiciary (FACIJ), Mr. Bayo Akinlade.

Speaking during the presentation which was attended by some Judges and Representatives of the Lagos State Judicial Staff Union (JUSUN), the Honourable Chief Judge commended the convener of the FACIJ as well as members of the bar and the judicial workers for their support to the vision, the mission and the commitment of the Lagos State Judiciary. In her speech the Chief Judge noted:

Speaking on her vision to stamp out all forms of official corruption in the Lagos State Judiciary, the Honourable Chief Judge stated:

“Upon my assumption of office as the CJ Lagos, one of my primary concern was and still is to ensure a progressive upgrade of the judiciary especially in the area of stifling corruption in the Lagos Judiciary.”

“I am committed to ensuring that this development is brought to fruition through concerted effort which has been and would continue to be made.”

Encouraging the public not to lose sight of the indispensable role of the judiciary in the fight against corruption, the Chief Judge noted that corruption as a cankerworm has the capacity to destroy any system if unchecked.

“Corruption continues to place judiciary in the eye of the storm but we cannot allow that deter us or weaken our resolve. Corruption as a canker worm has debilitating effect which rapidly destroy any system.”

“Admittedly, the act of misconduct of a few may have created an impression that all judicial officers are corrupt. I however must say that the times have changed and the happy days of the few unscrupulous elements who continue to soil our image are over.” 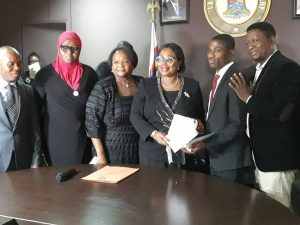 She reiterated her resolve to redeem the image of the Lagos State Judiciary and warned judicial officers that anyone  found culpable will not be spared and shall be shown the exist swiftly.

“It is therefore important that the vision, the mission and the core values are communicated to all officers for them to assimilate and internalize. The flyers would come in handy in this regard as they would be a daily reminder of the corporate goal.”

The Chief Judge while encouraging the lawyers to report erring officials also advised that  such petitions must be without malice.

“I have constantly seen lawyers forward  petition to my office putting on an armour of boldness to follow through same without fear or favour. This is greatly encouraging and laudable. I would however appeal to litigants and advocates to only lay complaint when they have claims that are substantiated and devoid of malice.”

She went further to commend the Judges in Lagos State judiciary noting that they also share in the anti-corruption vision.

She commended members of the Bar for their support and noted that the synergy would ensure that the fight against corruption is won. She urged that incidents of corruption must be reported without hesitation since that is the only way this would be known and addressed.

“I will appeal to members of the bar that when there is an incident that needs to be reported, do not hesitate because we need you to help us.”

“ We don’t have a crystal ball to look at what is happening in the various departments that we have. But if you condone it and you don’t report, then you are not only hurting yourself but you are hurting the institution and the future of the institution.” 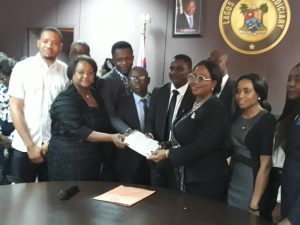 The Chief Judge who identified the problem of the judiciary as not being the judges but the support staff noted with serious concern:

“I must say that I am proud of the judges in Lagos state judiciary. My problem which I don’t hide is with the supporting staff and that is where we have been received petitions from. As many of these petitions have been investigated. We do not waste time investigating them and we do not waste time in recommending them for disciplinary actions. This week alone, the Chief Registrar and the Committee set up have met 4 times to consider the various petitions and complaints received against supporting  staff.”

“This is the area I seek support of the public. Don’t be intimidated. Because it starts from the support staff. They have to imbibe attitudinal change. The rules and regulations must be complied with strictly. You must have that sense of responsibility to do your work without any form of inducement.”

“We ban even the idea of saying thank you for doing your job. We don’t want it again in the Lagos State judiciary because this tradition of wanting to say thank you when somebody does something good for you has been bastardized in the judiciary. I know it is a cultural problem but when a culture has become a negative vice into the justice sector we would not allow it.”

“I see no reason why a registrar of court would refuse to take a file to the judge after it has been assigned to the judge. They keep it until the lawyer comes before they notify the judge.” She stated.

“If we can clean that cadre then the future of the Lagos Judiciary would be a brighter one. For you to come in and do your business quickly without stress is what we are trying to achieve. Not that you go to the probate section and the file is there for file to move from just one office to the other it takes 4 weeks. We are going to keep a track on all that. They have to stop.”

She thanked Bayo Akinlade and all those who have supported his vision. 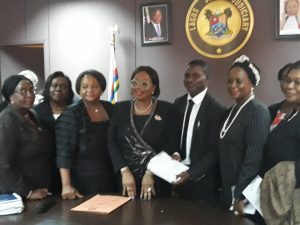 Mr. Bayo Akinlade appreciated the Chief Judge for the opportunity to be part of the fight against corruption’

“ I am glad that the Chief Judge  has given us the opportunity to be here this afternoon.”

“The vision that we have is to do what is right to make sure that we build a future for our children. Unfortunately, we have gone down the part where many people do not rely or trust us anymore and I asked myself when I got back to Nigeria, what can I do to help in rebuilding the nation.”

“The judiciary is the only arm of Government that is run by one profession, the legal profession. It places a big burden on us and because such a burden of running an entire arm of Government is placed on us, it is our responsibility to ensure that our country and community is built in a way to enable us leave together in harmony.”

“We thank the Honourable Chief Judge for this opportunity given to us to make impact. I know that if we work together, we can achieve so much.”

The Chairman of the NBA Ikorodu Branch in his speech extended the support of the members of the Bar to the Chief Judge noting that the essence of the awareness is to ensure that nobody is cut unawares. He noted that eliminating corruption in the judiciary has been on for a while but the emergence of the current Chief Judge has added an uncommon impetus to the fight.

“The point is that it is no longer business as usual. There is need to create adequate awareness so that when anybody is caught, they would have no one to blame.”

“The emphasis has been fighting corruption in the judiciary. The fight is not directed on the bench and workers. It affects those who give and those who receive. The implication is that even lawyers are involved. As we are from the bar watching the judiciary, it is also a correlative duty of the support staff to watch us.”

Mr. Akinlade presented the 20,000 copies of the Anti-corruption flyers to the Lagos State Judiciary.  He explained that the reason for sharing the flyers is to ensure that litigants and lawyers are on the same page in the fight against corruption.

He drew the attention of the public to the hotlines and whatsapp lines to be contacted if any judicial officer becomes antagonistic. He also encouraged the judicial officers to call the numbers if any bribe is offered by lawyers and litigants.