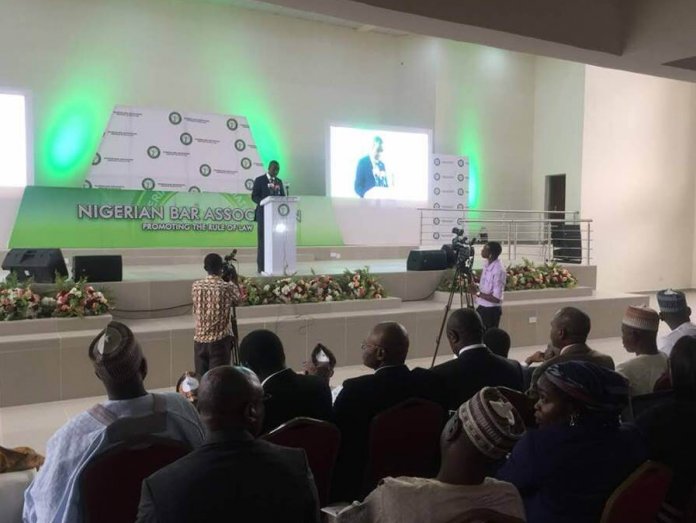 The Chief launcher of the NBA endowment fund in support of NBA access to justice intervention in the Northeast, Chief Wale Babalakin SAN has  pledged 10million Naira to the support fund.

The above was made known by the NBA President Mr. A.B Mahmoud SAN in a twitter message during the launch of the endowment fund which was held earlier today at the at the NBA National Secretariat Auditorium, Abuja.

Highlighting the basis for the establishment of the endowment fund, the NBA President noted:

“In the IDP camps, thousands of malnourished children and women in camps flocked around us. Many of us literally broke down faced with sheer scale of human suffering. The detention centers where the suspected insurgents where kept were brimming with hundreds of detainees living in sub-human conditions.”

“We were also briefed by our colleagues on the extent to which they had been impacted by the crisis. Some had lost their lives, some were injured and maimed others had lost their practice. Many had also fled the state. Justice Sector institutions were nonexistent in most parts of the state and where they existed, were barely functioning It was clear to me that the Nigerian Bar Association had not paid sufficient attention to the events in region and we had somewhat failed in our constitutional mandate of promoting access to justice and the rule of law.”

Thus when I was elected President of the Nigerian Bar Association, back in August 2016, in consultation with our colleagues, we decided that we must scale up our public interest engagements in addition to our other priority programs which we had framed as a four point agenda: 3Rs & P, enhancing the Regulation of the profession, improving the Representation role for our members, Re-engineering the NBA as an organization and scaling up our Public Interest activities.”

“It was in the context of our Public Interest engagement that we prioritized the North East Region as well as the Niger- Delta Region. ”

The Chief launcher of the NBA endowment fund in support of NBA access to justice intervention in the Northeast, Chief Wale Babalakin SAN pledged 10million Naira to the support fund. pic.twitter.com/ooMY2HHWT8