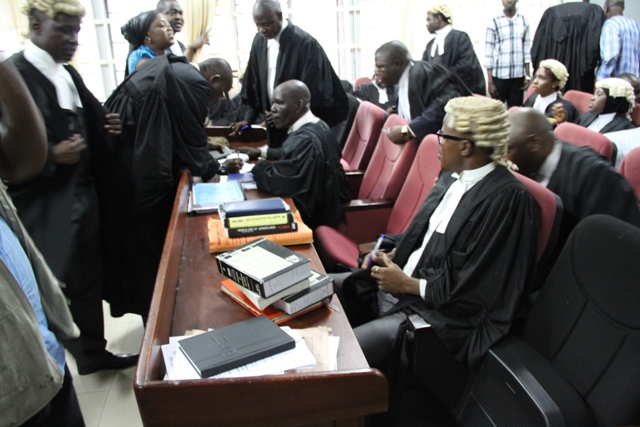 To commence an action in anywhere and Nigeria in particular filing fees are paid to the court registry. In other climes such fees can barely cover sundry expenses but in Nigeria the courts have become revenue generating agencies instead of social service.

After filing matters in court, cases are expected to progress without hindrance but where a party appears to be deliberately frustrating the wheels of justice, the courts have devised means to prevent and to punish such deliberate step. For example, Order 44 Rule of the High Court of Lagos State (Civil Procedure) Rules 2012 gives power to the Judge to extend time within which to do anything which ought to have been done for a fee of N200 per day of failing to do. This provision is captured in all the courts, default fee only defers from court to court. This provision by the courts have helped to check how parties frustrate matters.

However, this provision is ONE SIDED and its one-sidedness makes it UNFAIR and UNJUST to the other party to the suit.

How is it ONE SIDED?

Consider the exchange below:

COURT: Where are we in this matter?

DEFENCE COUNSEL: We have since filed and served our defence. The matter is for
trial today and we are prepared.

PROSECUTION: We were served with the defence, but we noticed that the
defence has raised issues in their defence that requires our reaction. We have filed our reaction and I believe it is before Mi Lord.

DEFENCE: My Lord, we have not been served with any processes.

COURT: Mr. Lagbaja, what did you file and when did you file what you filed?
PROSECUTION: We filed Further Proof of Evidence and a Motion For Extension of Time, both filed yesterday Mi Lord

COURT: When were you served with the Defence?

PROSECUTION: We were served early November I believe

COURT: That’s how many months ago?

COURT: Have you paid the default fees?

PROSECUTION: It is OFFICIAL Mi Lord

The judge goes through the processes and remembers that it’s a government agency that is prosecuting through a private practitioner and orders counsel to move his application.

DEFENCE: My Lord, we have just been served with this Further Proof of Evidence in open court, we will need to study it and react where necessary.

COURT: Take a date then

That scenario plays out every day in our courts across Nigeria. Prosecution or anyone
handling any case on behalf of any Government agency or government itself are insulated
from paying fees for default or doing things at the right time therefore, they can afford to
delay and frustrate matters. I have seen judges order cost against the person of such
Prosecuting Counsel insisting the Counsel and not his employer or party should pay such
cost from his pocket. I am not aware of any law that says government should not pay filing
fees or cost for delaying matters in court. If such a law exists then that is a breach to the
right to fair hearing. No wonder government will wake up overnight and increase filing fees
because they don’t pay filing fees for their matters.

It is therefore proposed that the issue of punitive measure for delay and frustration of the
wheels of justice should apply to all and there should be nothing like official as this has
made those handling government cases to be sloppy and counter-productive thereby
infringing on the right of the Accused/Defendant to a fair hearing and speedy dispensation
of justice.

I believe the NBA can and should take the government at various levels on this because
whatever is good for the goose is equally good for UNGANDA as I have been made to
understand.