BOSAN in a letter signed by the Secretary of the Body Seyi Sowemimo SAN noted that Mr. Usoro was indeed the best man at the polls.

“I am writing on behalf of the Body of Senior Advocates of Nigeria to congratulate you on your recent election as the president of the NBA. All of our members join in sending their warmest congratulations and best wishes for a successful tenure.”

“The election was keenly contested and we believe that the best man won given the broad support and magnitude of the vote which you received from the various branches which cut across all the zones within the country.”

BOSAN pledged their support to the President in the discharge of his duty.

“As you will appreciate, your election comes with great responsibilities especially at a time of great expectations from the public for the legal profession to play a more pivotal role in one affairs of our nation. We have no doubt that you would live up to our expectations and you can readily count on the support of the body in the discharge of your duties”

“It is our earnest prayer that the Almighty will grant you the grace to faithfully and successfully discharge the enormous responsibility which you are about to assume.” 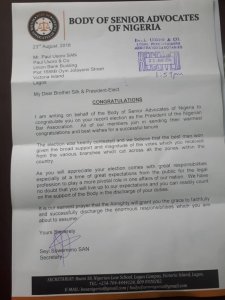