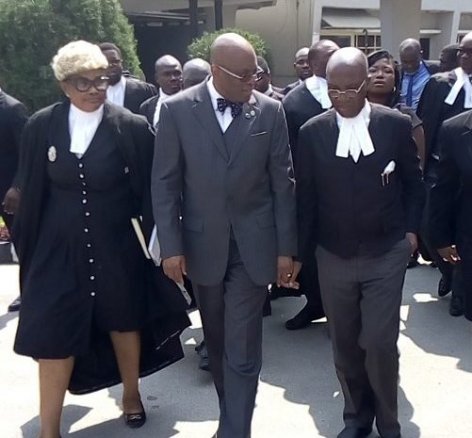 Usoro pleaded not guilty to the 10-count charge of money laundering and fraudulent conversion of N1.4bn allegedly belonging to the Akwa Ibom State Government.

Objecting to the above request, the prosecuting counsel Mr. Rotimi Oyedepo informed the court that the matter was adjourned for arraignment and there is nothing presently before the court seeking to set aside the arraignment. He argued that the time for objection such as that which is brought by the Defendant should be after the plea is taken. He referred the court to Section 396 of the ACJA, Section 269 and 271 of the ACJA as well as Section 386 of the ACJA and urged that the court should proceed with the arraignment and not wait for the decision of the Chief Judge on an administrative duty. He also urged the court not to rely on a letter written to the Chief Judge on some administrative decision to delay the progress of the case.

The Court ruled in favour of the Prosecution and held that the arraignment would not jeopardize the decision of the Chief Judge to either allow the court to proceed with the trial of the case or recourse itself.

After the arraignment, Mr. Usoro’s bail application which was unchallenged was argued by Chief Olanipekun SAN. Chief Olanipekun urged the court to grant the Defendant bail on self recognition several reasons including the fact that as the President of the NBA, he has a lot at stake and would be available for trial.

The Court granted the Defendant bail in the sum of N450m with one surety in like sum, who must have landed property in Lagos or Abuja and who must not be less than a Director in civil service.

The Honourable Court also granted the application of the defence team for Mr. Offiong B Offiong SAN to take the Defendant on bail pending the fulfilment of the bail condition.

The case was subsequently adjourned to February 5, March 5 and 6 for trial.