A group who identified themselves as Union Members are currently disrupting the ongoing 14th edition of the Gani Fawehinmi’s Annual Lecture/Symposium holding at Ikeja. According to a member of the group who spoke with DNL Legal and Style, their grouse is that Chief Mike Ozekhome SAN should not have been invited as one of the speakers at the Lecture.

The group refused to listen to the likes of Chief Femi Falana SAN who were making frantic effort to ensure that normalcy returned to the event.

The angry protesters are insisting that Chief Ozekhome is condoning corruption and benefiting from corrupt politicians and no longer stands right in the Human Right Struggle.

This is coming on the heels of reports by some media houses that a group known as the  Alliance of Nigerian Students Against Neo-liberal Attacks (ANSA) demanded that  NBA should withdraw the invitation to Mr. Ozhekome as one of the speakers at the yearly event or be ready to face lawful protest.

The group had in their letter to the NBA accused Chief  Ozekhome SAN of using the legal system to defend politicians accused of corruption.

At the time of filing this report efforts are still being made to calm the protesters. 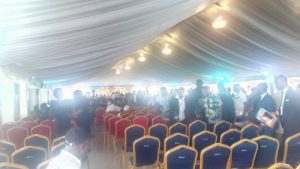 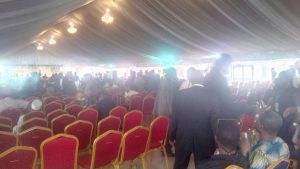 We would bring you detailed report of the event shortly.