Home Opinions A Clarion Call to NWLR To Go Online 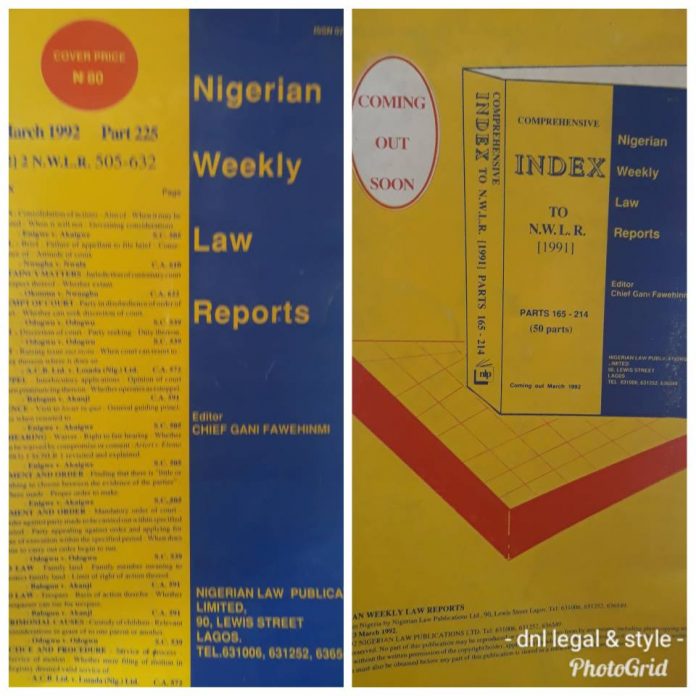 As a law student, the only law report I knew was the Nigerian Weekly Law Report (NWLR). This was probably due to the popularity of the founder and Editor-in-Chief, Gani. It might have also been for the reason that Gani had in his philanthropic nature mandated that a copy of each part of the NWLR should be delivered to the institution’s law library; NWLR was the only law report in the law library. My restricted knowledge to NWLR could also have been for the reason that it was (or is) the most popular law report in the country.

NWLR has been around for over thirty years. It has grown during and after the life of its founder to be the most trusted law report in Nigeria. However, the advent of Information Technology into every sphere of human endeavor also had its toll on legal practice particularly law reporting.

Several outfits now have their versions of online law reports. No doubt, the IT compliant law reporting is more accessible, easy to use, convenient and comfortable. It eradicated the need for counsel and law researchers to access authorities with just a click.

There are however some conservative lawyers who are sticklers of norm and are emotionally attached to the NWLR. No one can blame them for taking such decision when the reportage in NWLR is critically assessed as against other law reports. The big question is, WHY HAS THE NIGERIAN LAW PUBLICATIONS LIMITED FAILED TO LAUNCH AN ONLINE VERSION OF NWLR?

Could there be a deliberate attempt by NWLR to keep its report in the corner of texts? Are there fears nursed by the Editors of NWLR that the tradition laid down by Gani would be eroded if an online version of NWLR is launched? Did Gani in his characteristic manner give an instruction that NWLR must not be published online? Is this set back a mere administrative issue?

Whatever the reasons, I join the several thousands who are appealing individually and under their breath to appeal to the Nigerian Law Publications Limited to lunch the online version of the NWLR. It would be a major milestone in law reportage in the legal system.

If it is another way to honour the spirit of Gani, I undertake to offer my free advise and expertise to this concept if it is ever considered.

Is Cryptocurrency Legal in Nigeria? – Actions Towards the Regulations of...