The Economic and Financial Crimes Commission (EFCC) has filed corruption charges against the Chairman of the Code of Conduct Tribunal (CCT), Justice Danladi Umar.

The case with charge No. CR/109/18 was filed at the High Court of Federal Capital Territory Abuja today.

Perusing the charge sheet, DNL Legal and Style observed that in the two count charges, the CCT Chairman is being prosecuted for allegedly asking for the sum of N10m from a certaiin Rasheed Owolabi Taiwo sometime in 2012. The second count alleges that the Justice Umar collected the sum of N1.8m from the said Rasheed Owolabi Taiwo through his Personal Assistant Alhaji Gambo Abdulahi to quash the charges against him in Charge No. CCT/ABJ/03/13.

It would be recalled that Justice Umar’s personal assistant, Ali Abdullai Gambo, was docked by the  EFCC, before an FCT High Court 2017 on charges of conspiracy, bribery and abuse of office.

Mr. Gambo’s arrest and subsequent arraignment followed a petition that he received a bribe of N1.8m on behalf of the tribunal chairman ostensibly to quash a case before the CCT.

The EFCC alleged that Mr. Gambo, sometime in August, 2013 in Abuja, made a confessional statement to investigators that the petitioner, indeed, paid the money into his Zenith account on December, 12, 2012.

He, however, claimed that the money was payment made by the petitioner to assist him offset his father’s medical bill. But, he could not give any sensible reason why an accused being prosecuted by the tribunal where he worked would want to support him financially.

The EFCC insisted that the claim by Mr. Gambo was false and charged him for bribe taking but he pleaded not guilty to the charge.

Although Mr. Gambo was the person being prosecuted then, there were feelers that the shadow of graft and impropriety clinging to the tribunal’s boss is still heavy and many people believe that he was to be the ultimate beneficiary of the bribe and that his assistant only took the fall for him.

Umar was letter cleared but but the EFCC hinted that there was indeed some, discovery of fresh clues which linked the tribunal boss to the alleged bribery.

“The anti-graft agency may have concluded their investigation hence the charges against the CCT Chairman.

Copies of the court papers below: 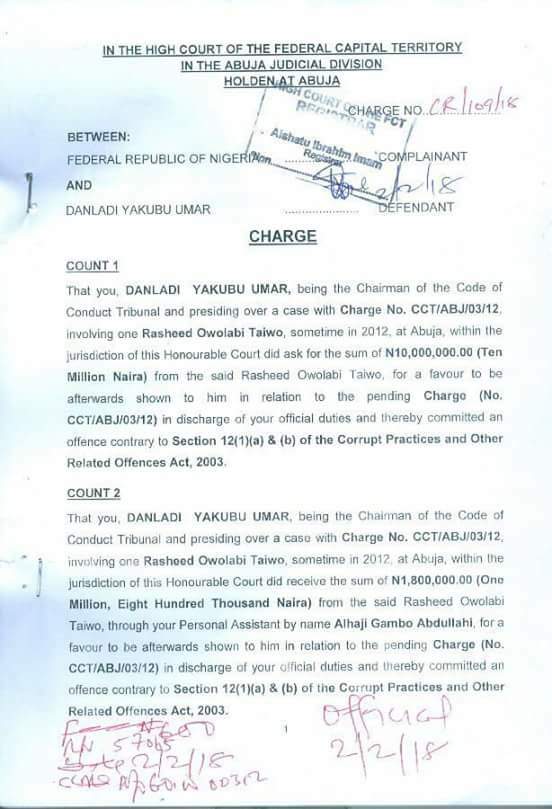 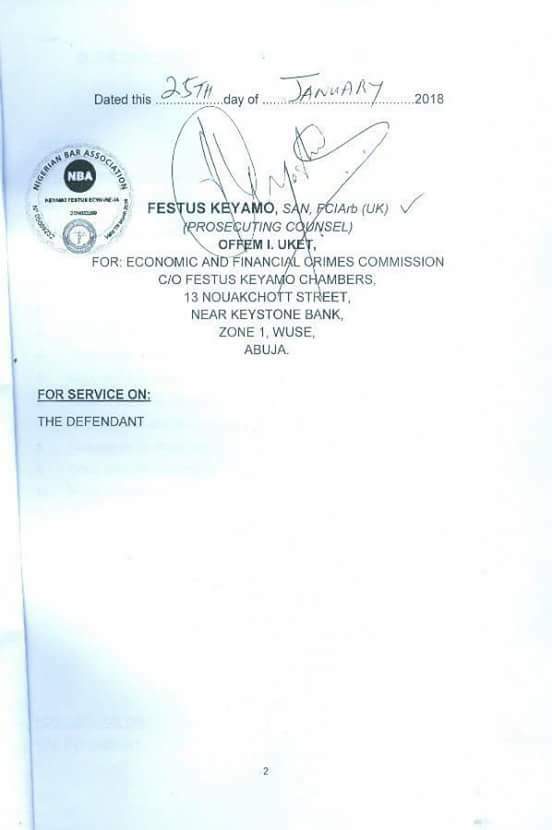 [Photos] Defendant Jumps to His Death at Ogba Magistrate Court