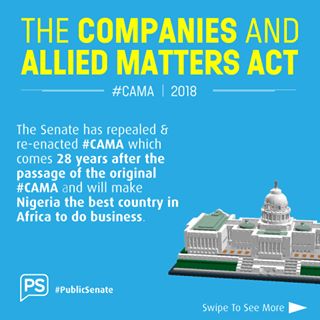 On 15 May 2018, the 8th Senate considered and passed the Companies and Allied Matters Act (Repeal and Re-enactment) Bill, 2018 (the Bill) after its third reading. The Bill was the result of a collaborative effort among the Senate and key stakeholders in the business community.

SHAREHOLDING AND DIRECTORSHIP OF COMPANIES

The Bill provides a framework for single shareholder companies, as well as single director companies.

In Nigeria, many charitable organizations are forced to set up as incorporated trustees, due to the fact that Companies limited by guarantee cannot be incorporated within the framework of CAMA without the consent of the Attorney General of the Federation. The Bill dispenses with this needlessly complex hurdle.

For a business intending to incorporate, several changes have been implemented in the Bill. As it relates to a company’s form of memorandum, the Bill now imbues the Commission with the power to amend the form of memoranda of association through regulations.

The Bill has departed from the current position in CAMA, and provides that the Commission may prescribe model articles, which apply only to the extent that the company has not registered its own bespoke articles.

Recognizing the utility of technological advancement, the Bill now statutorily recognises that applicants may reserve their names through electronic means. This arguably offers little by way of change, and serves as codification of established practice.

COMMON SEAL OF THE COMPANY

The Bill recognises that for many companies, the common seal is a relic, especially as the rules of evidence do not require a seal in the strict sense. Accordingly, the Bill now makes it optional for a company to have a seal, the use of which is to be regulated by the Company’s articles.

The current position in CAMA that precludes the entry of trusts in the register has been dispensed with by the Bill. It is expected that the inclusion of trusts and similar arrangements in the register of members would enable a clearer articulation of shareholding and also empower the relevant tax authorities to trace the beneficial ownership of shares.

The Bill now provides that all shareholders with at least 5% shareholding in any company have an obligation to disclose to the company and with the concomitant requirement that it would be noted in the register of members and annual returns of the company in question.

The Bill marks a shift from the concept of authorised share capital, in favour of minimum issued share capital – thus, at every given time, the relevant computation for the purpose of paying stamp duties and other relevant taxes are the actual shares being held by shareholders.

The Bill has expanded the scope of situations where it is permissible for companies to buy back their shares.

In addition, small companies are no longer mandatorily required to convene annual general meetings, in accordance with the Bill.

The Bill makes its optional for small companies and those with one shareholder to choose whether or not to appoint a company secretary.

The Bill now requires public companies to display their audited accounts on their websites, in order to ensure the public is kept informed. In similar vein, parent companies are obliged to ensure their subsidiary companies keep proper accounting records, in accordance with the Bill.

The Bill enhances minority shareholder rights, as they may bring derivative actions not only in respect of the company in question, but also in respect of its subsidiary companies.

The Bill introduces three new insolvency provisions, to wit: (i) Administration – (which differs from receivership as the administrators duty is owed to the company); (ii) Netting Provisions and (iii) company voluntary arrangements.

The Bill is further revolutionary as it brings limited liability partnerships (LLP) and limited partnerships (LP) (previously regulated only at state level, and that, only in a few states) within the framework of the Bill. As such, the Bill provides that an LLP will be a legal entity, which would be a body corporate and exist separately from its members.

Among other things, the Bill makes fundamental structural changes in connection with the Corporate Affairs Commission (the Commission). From a governance perspective, the Bill establishes a governing board for the Commission, and provides nuance in the membership and qualification of those appointed to the governing board.

With the foregoing in mind, it is expected that if and when the Bill is passed into law, it will repeal the Companies and Allied Matters Act Cap. C20, Laws of the Federation of Nigeria, 2004. While the changes address some issues that typically arise in structuring and operating investments in Nigeria, some hold the view that the amendments introduced by the Bill fall short of the far reaching improvements required to bring Nigerian corporate law and regulation up to date with more developed climes. Notwithstanding these differing perspectives, it is envisaged that the Bill would impact the Nigerian business climate especially for Small and Medium Enterprises, and impact positively upon the inflow of foreign direct investment into Nigeria.