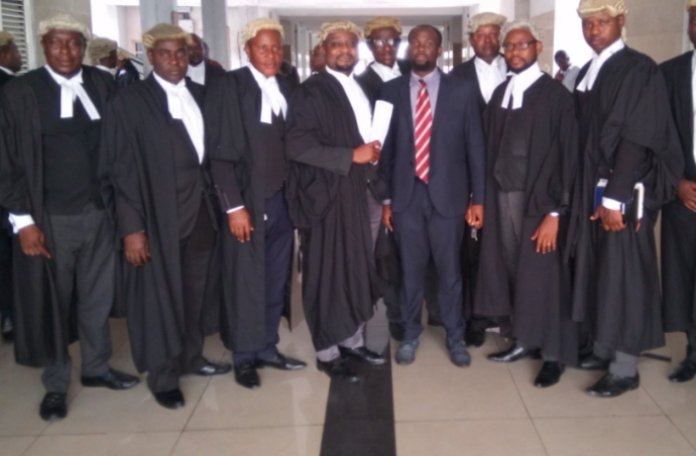 Honourable Justice O. Omereji of the Rivers State High Court on Monday, 17/09/2018 awarded the sum of N10m damages against the police for the unlawful detention of a lawyer Olubisi M. Afolabi.

In a Fundamental Right Enforcement Suit filed by the lawyers in Suit No. PHC/2591/2018 against the Commissioner of Police and four others, the Lawyer  sued the Police for illegally detaining him for more than 24 hours.

The case as narrated by the Applicant is that the police arrested his driver for driving an unregistered and foreign number plate and upon explanation that the vehicle was recently acquired and presentation of necessary documents, the police demanded for a sum of N10,000 which the applicant objected to. The police arrested the vehicle on 18th August, 2018 for the applicant’s refusal to pay the demanded sum of N10,000.

When the applicant got to the Eneka police station, Port Harcourt, he met with the 3rd respondent (the Divisional Police Officer, CSP YAHAYA BELLO SAM), who rained insults on the applicant and for the applicant’s objection to the insults, the DPO ordered that the applicant be arrested and detained. The intervention of a senior lawyer and neighbor of the applicant, Mr Felix Oguche, Esq who offered to stand as surety proved abortive as the police officers demanded for N30,000 as bail sum. The applicant was thus detained from 18th of August, 2018 till 19th of August, 2018 before his release on bail but his vehicle was not released on the basis that the applicant must first write an apology to the DPO for raising his voice in the DPO’s office.

Based on the foregoing facts, the applicant, through his lawyers, filed a fundamental rights suit, signed by M. T. Saheed, Esq. After hearing the lead counsel of the applicant, O. D. Abdulkareem, Esq, leading the Nigerian Bar Association Vice Chairman, Port Harcourt, C. B. Eke, Esq together with other lawyers and upon consideration of the counter-affidavit of the respondents together with their written submission, adopted by P. O Ekom, Esq with F. D. Sokari, Esq the court gave judgment in favour of the applicant, while declaring the act of detention of the applicant and his vehicle and demand for bail money from the applicant by the police as unconstitutional. A sum of N10,000,000 was awarded as damages to the applicant but the relief for formal apology in writing, published in two national dailies by the respondents was refused.

It is interesting to note that the police in their response to the suit, prepared a charge without number, date and filing same in any court registry and also altered the application for bail form for the application to reflect 18th of August rather than 19th when the applicant was released. The statement written by the applicant at the Police station was also not exhibited by the police. The court, while giving its judgment berated the police for these unprofessional conduct together with their unjustifiable refusal to comply with an earlier order of a court, ordering for release of the applicant’s vehicle which they admitted to have been served with.

The reaction of the police lawyer to the suit in the open court on 10th of September, 2018 was that every sector of Nigeria needs to be sanitized. The police has also boasted after the judgment that the monetary compensation in favour of the applicant will be difficult to be enforced.