A Federal High Court sitting in Abuja presided over by a Hon. Justice John Tsoho in a landmark judgment delivered on Monday 22nd October, 2018 has ordered the Nigeria Police Force, the Inspector General of Police and the Commissioner of Police F.C.T. Command to pay the sum of 50 Million Naira and publish an apology in Two National Newspapers to popular musician and activist, Mr. Charles Oputa alias Charly Boy.

In the suit filed on the 29th of March, 2018 by his lawyer and human rights activist, Mr. Inibehe Effiong to enforce his fundamental rights, the 67-year-old popular musician gave a graphic account of how policemen numbering over 100 from the F.C.T. Police Command invaded the Unity Fountain in Abuja on the 8th day of August, 2017 and attacked him and his group with teargas canisters, hot water cannon and wild police dogs during the Resume or Resign protest when he led other activists to protest the prolonged absence of President Muhammadu Buhari from Nigeria on account of his medical vacation in the United Kingdom.

Charly Boy further narrated that the attack by the policemen was so severe that he collapsed in the process and was rushed to the hospital.

He also stated that the police attacked them because of claims that their protest over the President’s absence, which had exceeded 90 days on the second day of their daily sit-out protest, had gone international and brought serious embarrassment to the country.

Delivering judgment on Monday in the case marked as Suit No. FHC/ABJ/CS/343/2018 between Charles Oputa versus The Inspector General of Police & 2 Others, Justice Tsoho held that there was no evidence that miscreants invaded or stormed the premises of the protest as alleged by the police.

On whether the Applicant is entitled to stage the protest, the court held that protest is a constitutionally guaranteed right provided it is done peacefully and that even if miscreants were on the scene to hijack the protest, the Respondents possess enough security measures to dislodge such persons and maintain law and order.

‘’The Respondents (the Police) need not exercise an uncommon aggression and mayhem to wade off alleged miscreants’’ Justice Tsoho ruled.
According to the court, the Respondents admitted in their Counter Affidavit that it was in the bid to protect members of the public and public properties from the ‘’miscreants’’ who suddenly took over the protest that the men and officers of the Respondents had to use teargas canisters and hot water Canon in order to disperse the hoodlums. But that the Respondents stated that the teargas and water Canon were not directed at the Applicant.

This assertion according to the court, lacks substance as teargas circulates and affects all persons within the premises. And the atmosphere generally affected which causes cough.

The court found that the Applicant has disclosed a reasonable cause of action against the Respondents and that the Respondents violated the Fundamental Rights of the Applicant to dignity of the human person, freedom of expression, peaceful assembly and association as enshrined in Sections 34, 39, and 40 of the Constitution of the Federal Republic of Nigeria, 1999 (as amended).

‘’The law is that the court has the right to grant redress to anyone whose right is violated and the Applicant is entitled to a remedy.’’ said Justice Tsoho.

ALSO READ   On Ageism, the Aged and Human Rights in Africa - Terinwa Adesipo

‘’Relief 4 is granted and the Respondents are ordered to publish an apology to the Applicant in 2 National Newspapers for violating his Fundamental rights. The sum of 50 Million Naira is awarded against the Respondents as General and Exemplary damages.’’

The court also ordered perpetual injunction against the Respondents from violating the fundamental rights to dignity of the human person, freedom of expression and peaceful assembly and association.

Reacting to the judgment, the Applicant’s counsel, Inibehe Effiong described the judgment as a resounding victory for democracy, freedom of expression and peaceful assembly in the country.

‘’This judgment sends unequivocal message to the Nigerian Police that they have no power to stop or disrupt peaceful protests by Nigerians. The police by this judgment cannot invent flimsy excuses to stop citizens from exercising their fundamental rights to freedom of expression and peaceful assembly. I am highly elated by this victory for democracy.’’ Effiong said.

Reacting to the judgment, the Secretary of the OurMumuDonDo Movement, Comrade Raphael Adebayo, in a statement said that the judgment has raised the confidence of Nigerians in the judiciary.

‘’The OurMumuDonDo Movement wishes to express satisfaction over the judgment of the Federal High Court in Abuja on the unprovoked attack of the police on its members during the ResumeOrResign Protest. This development is a sign that the Nigerian judiciary is indeed committed to upholding the supremacy of our country’s Constitution.’’

‘’We also wish to thank the Judge for his sagacity in handling this case, just as we are grateful to our team of young, vibrant, and courageous lawyers who have tirelessly worked on this case to get us to where we are right now.’’

‘’We wish to state unequivocally, that this victory is not only for the OurMumuDonDo Movement but also for every Nigerian who believes that a new and better Nigeria is achievable. We strongly hope that by virtue of this victory, Nigerians will feel more emboldened to speak truth to power, hold leaders accountable, and resist fear in advocating for issues of social order and social justice in our great country.’’ The statement read.

The Respondents were represented in the case by O. M. Atoyebi and M. D. Podos while Inibehe Effiong along with S. M. Oyeghe represented Charly Boy. 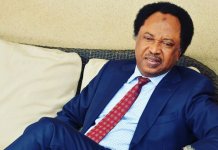 Attaching Stamp And Seal Payment Receipt Does Not Make A Process...