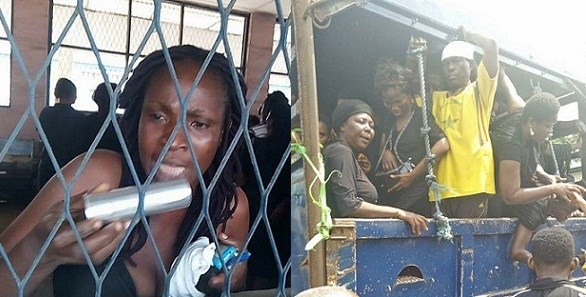 A Magistrate Court in Owere, Imo State, has ordered the release of over 100 women detained after a protest demanding the release of Nnamdi Kanu, leader of the Indigenous People of Biafra, IPOB.

The women were arrested on August 18 and detained following allegations of alleged treason and unlawful assembly among other offences.

There have been campaigns and demands for their release, especially on social media. PREMIUM TIMES reported how Global rights group, Amnesty International, on Friday condemned the detention of the women protesters describing it as a violation of their rights.

In an interview on Friday, a human rights lawyer who was at the court, Sam Amadi, confirmed their release, saying they were let off following a directive of the Imo State director of public prosecution.

“Yes, they have been released. The DPP gave a directive for the case against them to be struck out, earlier today and we took it to the magistrate, along with the detained women. The court ordered the immediate release of the women. All them who came to the court were released from there.

“Only about 12 of them who were not in this prison are expected to be released from the Okigwe prison where they are held. The case has also been struck out,” Mr Amadi said.

The lawyer who represented the women, Ifeanyi Ejiofor, confirmed the development.

Earlier on Friday, the Takeitback Movement spearheaded by Omoyele Sowore, a presidential aspirant of African Action Congress (AAC), demanded the release of the women.

“We strongly protest the unjust detention of over 100 Nigerian women in Owerri, Imo State, and are outraged at the biased treatment of Nigerians in their own country,” the movement said in a statement by its Director of Media and Communication, Rachel Onamusi-Kpiasi.

“Nigerians are slaughtered mercilessly at an increasingly disturbing frequency by herdsmen and the present government neither speaks nor acts. There have been zero arrests of the perpetrators and no compensation for the surviving victims. Boko Haram has decimated the North with scant retribution save for the present government swelling their coffers in ransom money.

“But women – our mothers, wives and sisters – who carried out a peaceful protest and caused neither harm nor disturbance to civic peace are quickly rounded up like cattle.”

The group said the government’s disregard for human rights of citizens is a disrespect for human life.

“The government’s disregard of the fundamental human rights of her citizens, as well as the reports of starvation of the arrested women since their incarceration points to a disrespect for human life and well-being. Carrying IPOB memorabilia can never be sufficient justification for this gross miscarriage of justice.

“The TakeitBack Movement fundamentally believes that all Nigerians have a right to peaceful protests. We also believe that raising questions about the restructuring of Nigeria is an inalienable right.

”Again, we ask, where is the justice? While men, who have maimed and killed hundreds walk around free and unfettered, our mothers from the South-east are in prison for raising a flag. We demand the immediate release of these women,” the group said.