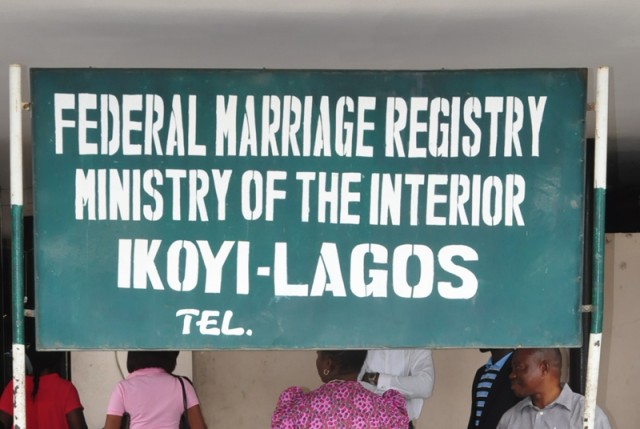 A Federal High Court in Lagos has upheld the exclusive powers of local councils across the country to register marriages in accordance with the extant Marriage Act.

It declared as subsisting a 2004 judgment of the court which affirmed the exclusive powers of Local Government Councils to register all marriages.

Justice Chuka Obiozor, who delivered the judgment, said it was needless for the plaintiff to have instituted another suit on same subject matter which had already been decided by the court in 2004.

The News Agency of Nigeria (NAN) reports that the suit was filed by some local government councils in Nigeria, challenging the power of the Federal Ministry of Interior to operate marriage registries.

The respondents in the suit are the Federal Ministry of Interior and the Attorney-General of the Federation.

The judge, a professor of law, ruled: “First of all, there is a decision of the Federal High Court sequel to an originating summons taken out in suit FHC’L/870/2002; there is no evidence before this court that the decision has been nullified on appeal, or that any appeal is pending against the decision

“Surely, a judgment of a court of law is presumed valid, and the parties are bound to obey it.

“For this reason, judgment of court in civil and criminal cases, including questions of law and facts therein, are valid until set aside on appeal.

“Unfortunately, the substance of the claims of the plaintiff before me, is a re-submission of the issue already settled in FHC/L/870/2002.

“I decline to follow such hideous trajectory which could only lead to perdition and in order to obviate any prospect for judicial anarchy.

“It would be different if the plaintiff’s action and claims are merely anchored in the decision in FHC/L/870/2002 with corollary orders for injunction; this is not what I find in the primary claim of the plaintiff, which by the way, determines my jurisdiction.

“The jurisdiction of this court in this matter is not determined by the ancillary injunctive orders sought which constitute the incidental claims in this action.

“I shall however, decline to dismiss this suit, but strike it out, so as to avoid the unnecessary arguments that the plaintiff’s complaint have been determined on the merits.”

The court consequently struck out the suit, according to a Certified True Copy of the judgment obtained by NAN on Monday.

The local councils, through their lawyer, Mr Roger Adedimeji, had in the suit, asked the court to make declarative reliefs that the conduct and registration of marriages is the exclusive right of Local Government Councils.

They had referred the court to the earlier judgment of the Federal High Court delivered in 2004 by Justice Oyidamola Olomojobi in suit no. FHC/L/CS/870/2002.

The judgment upheld the exclusive powers of councils to register all marriages in Nigeria, in accordance with the Act.

The plaintiffs had, therefore, urged the court to restrain the Ministry of Interior either by themselves, their agencies, or servants, from further establishing any federal marriage registry in any part of local government areas in the country.

Besides, the plaintiffs asked the court to“seal all federal marriage registries established by the first respondent in all the applicants’ local government areas in Nigeria.”

NAN reports that Justice Olomojibi had in his 2004 judgment, held that all marriages celebrated in a “licensed places of worship” or contracted before a registrar, are valid.

The court had also declared valid all marriages contracted under a licence granted by the Ministry of Internal Affairs, any state ministry, or by any officer in any of the ministries.

Whereas in relation to local governments, Justice Olomojobi had held: “As regards registration of marriages only, this is within the exclusive authority of the registrar within the marriage district (Local Government) in accordance with the provisions of Sections 30 (1) of the Marriage Act and Section 7(5) of the 1999 Constitution.”

Meanwhile, the plaintiffs have commenced a contempt proceeding against the defendants over failure to comply with the judgement of Olomojobi in suit no. FHC/L/870/2002 which judgment was delivered in 2004.

In their suit, the plaintiffs had argued that by virtue of Section 1(5), paragraph 1 (i) of the 1999 Constitution, the Federal Ministry of Interior which is an agency of the Federal Government had no business registering marriages as it currently does.

But in their respective counter-affidavits, the defendants had opposed the plaintiff’s suit, urging the court to dismiss same for lack of merit.

They had described the suit as an abuse of court processes, pointing out that the issues raised in the suit had already been decided by Justice I.O. Harrison of a Lagos High Court.

They argued that the plaintiffs’ suit was misconceived, adding that the LGs could not celebrate or conduct marriages.

I Might Kill My Husband if Our Marriage is not Dissolved...