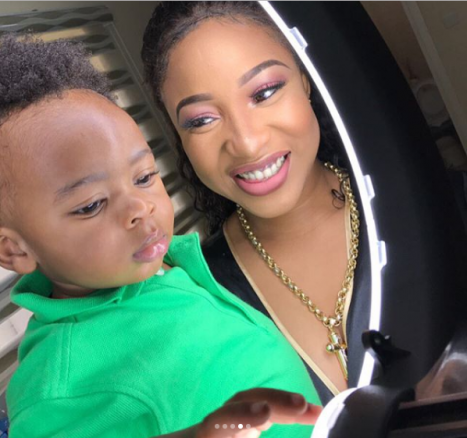 Magistrate P. A. Adekomaiya of Lagos Magistrate Court ordered the issuance of‎ the verdict to the parties involved.

A copy of the injunction has already been pasted at the entrance to Linda Ikeji Media premises.

Tonto’s estranged husband, Churchill, said the court’s verdict was a legal victory for the applicant their son.

He said he filed the suit on his son’s behalf to save him from any form embarrassment in future.

The ruling bars the showing, disseminating or broadcasting, either through television, blogs or the Internet the person, name, face, image, likeness or picture of King Andrea Omodayo Igo Churchill in the King Tonto Reality TV Show produced by Linda Ikeji Media pending the hearing of the originating motion in the suit.

Mr. Churchill had filed a suit against his ex-wife at the family court of the Lagos State Magistrate court on January 16.

He was challenging Tonto’s decision to feature their son, King, in the reality show.

According to him, the aim is to exploit his son for financial gains, expose the life and times of the little boy at a period when he cannot make a decision for himself.

According to him, the production is entirely an adult content.

It was earlier reported that Tonto had decided to lay bare her life for all to see on a new reality show titled, “King Tonto.”

In the footage, Tonto strips naked whilst surrounded by a surgical team and is seen undergoing a breast and butt enlargement in a popular Lagos-based cosmetic surgery hospital.

The procedure was filmed in real time.

“My body has been something that I have always been extremely ashamed of,” she revealed in the clip.

In the trailer of the reality show, Tonto also talks about life as a single mum, life as an actress, her fears, her struggles and finances.

This is said to be the first step to be taken by Mr. Churchill towards protecting his son’s rights as captured under the Child Rights Law of Lagos State.

Following this development, the reality show which was originally expected to debut in the first quarter of 2018 might be halted.

The estranged couple met two and a half years ago at Escape Nightclub in Lagos during his brother’s birthday party.

Tonto got pregnant six months after they met, and they later married.

In February 2017, the Nollywood star confirmed there were cracks in her 17-month-old marriage.

She revealed she had moved out of the house with her son. By June 2017, Tonto’s dad returned her traditional marriage bride price to his ex-son in law.

Man Gets 10 years Sentence for Beating Pregnant Girlfriend to Death