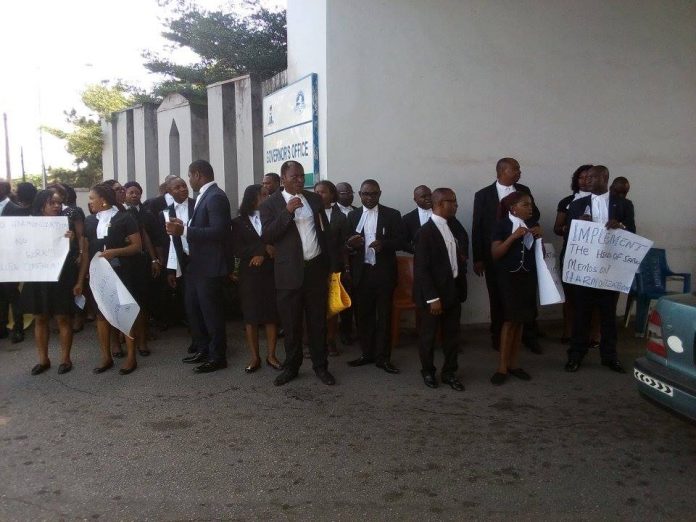 Lawyers, under the aegis of Law Officers’ Association of Nigeria (LOAN), Cross River State branch, on Monday, shut down courts in Cross River demanding for immediate implementation of harmonised salary.

The lawyers, working in the state ministry of justice, were piqued that the Cross River State Government had failed to implement the harmonised salary between those of them at the Ministry of Justice and their colleagues who were appointed Magistrates from the rank.

This was the second time in two years that lawyers in the state government’s employ would embark on strike to press home their demands.

On November 1, 2016, the association had written a letter to the Head of Service, Mr. Ekpenyong Henshaw, and subsequently embarked on a strike demanding that the approved harmonised scheme of service for law officers in the ministry be implemented.

And after series of attempts to make the state government see reasons with them but to no avail, they again decided to down tools over the matter.

Speaking to newsmen at the Governor’s Office, in Calabar, on Monday, the Chairman of Law Officers Association of Nigeria, Cross River State chapter, Mr. Eneji Amajama, said they decided to embark on industrial action to agitate for welfare and press for parity between Law officers and the Magistracy.  .

Amajama’s words,  “The governor came to the ministry of justice sometime in May to commission our Library and agreed that the harmonisation should be implemented and also made provision that more law officers should be recruited.

“Since then, more law officers have been recruited but the implementation of the harmonisation policy has not been done.

“We embarked on this action in November 2016 and they pleaded with us to suspend the action so that it can be captured in the budget of 2017.  When we wrote to the Attorney General, Joe Abang to remind him, he treated us with disdain and never allowed the governor to see our document and we were patient.

“That is why we said ‘let us move to the governor to tell him that there is a policy on ground.”

Reacting, the state government threatened to implement the ‘no-work no-pay’ policy if the lawyers continued with the strike.

Special Adviser to the Governor on Labour Matters, Comrade Effiong Ita Umo,  said the state government had approved their demands, but have not implemented the harmonisation of their salaries with that of Judicial Officers in the Magistrate cadre.

“This issue is in the 2018 Budget and presently being handled by the HOS Barr Ekpenyong Henshaw and the Accountant General of CRS.

The Special Adviser, who claimed that the association was not part of NLC and TUC and therefore could not declare a strike against the, urged the public and the service to ignore any body purporting to be in support of this group.