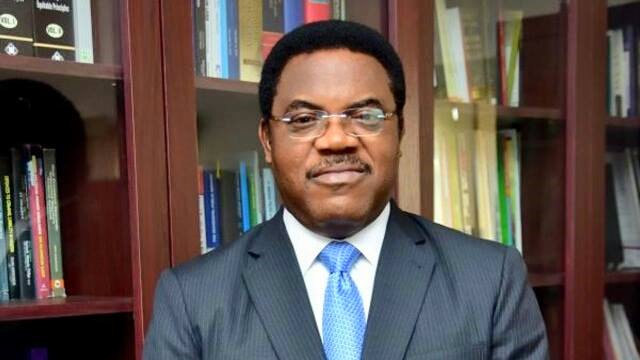 The Shell Hall of the MUSON Centre in Onikan, Lagos, came to life  on Thursday, February 22, 2018, as members of the legal community, as well as friends, colleagues and associates joined the family of foremost lawyer Deacon Dele Adesina, SAN, in celebrating a unique trio of career milestones: the 35th anniversary of his call to the Nigerian Bar; the 25thanniversary of the setting up of his law firm, Dele Adesina & Company (currently being rebranded as Dele Adesina LP); and the 10th anniversary of his investiture as a Senior Advocate of Nigeria.

The celebration, tagged, ‘35 – 25 – 10’ was graced by the cream of the nation’s legal profession, as well as other leading lights in the society. The Ekiti State University, of which Mr. Adesina is currently the Pro-Chancellor and Chairman of the Governing Council, was represented by a high-powered delegation led by the university’s vice-chancellor, Prof. Oye Bandele. By his royal presence, the traditional ruler of the celebrant’s hometown, the Alawe of Ilawe Kingdom in Ekiti State, also underscored his community’s pride in one of their favorite sons by leading a number of high chiefs to the ceremony.

Extolling the virtues of the celebrant as a multi-dimensional lawyer, cleric and gentleman, and a quintessential Ekiti man in her opening speech, the chairperson of the occasion and the first-ever female Senior Advocate of Nigeria, Chief (Mrs.) Folake Solanke, SAN, was also at her passionate best as she touched on the vexed issue of the welfare of young lawyers and the need for remuneration for lawyers in pupilage. The pioneer female SAN also decried the characterization of members of the legal profession as ‘corrupt,’describing such generalizations as dishonest and unacceptable.

One of the highlights of the evening was a lecture entitled, ‘Building a Successful Legal Career / Practice: Drop the Hook, Do not be Afraid.’ Drawing the core of his ideas from the lyrics of an American rap artiste, the guest lecturer, Prof. Kanyinsola Ajayi called on any one desirous of changing his world to begin this change from within. Lamenting what he called ‘the gangrene of mediocrity’with which the larger society has infected the profession of law (as manifested by the uncouth language and conduct some lawyers employ in court, as well as inappropriate attire and tardiness to work) Prof. Ajayi urged practitioners – especially young lawyers – to embrace ‘the internet of skills’ in order to effectively combat societal ills as well as the malaise of governance in our society, and a bankrupt socio-economic order in which poverty, rather than prosperity, is what is being shared today.

Another highlight was the formal presentation of a book of essays in honour of Deacon Dele Adesina, SAN. The 31-chapter book, ‘New Developments in Law & Practice in Nigeria,’ which was edited by a team led by Prof. Adebambo Adewopo, SAN, is a collection of writings on various areas of the law from a constellation of legal stars. It was reviewed by Dr. Dapo Olanipekun, SAN.

This was followed by testimonials, as various personalities took the stage to extol the virtues of Deacon Dele Adesina, SAN and to invoke God’s bountiful blessings upon his life and family, his practice and his service in the Lord’s vineyard.

The cutting of the cake – designed in the shape of the imposing edifice housing the offices of the law firm of Dele Adesina LP – followed therefore, as family, friends and well-wishers joined the Adesinas in performing the act.

In his remarks of appreciation, Deacon Adesina, SAN retraced his sojourn in the world of law from humble beginnings to this celebrated milestone, attributing it to the grace of God and to hard work. Amidst rousing applause from the entire house, he eulogized the ‘pillar’of his life, Mrs. Mercy Bola Adesina, for affording him the peace and purpose with which to pursue his mission in life. The legal luminary also took on the present plight of the legal profession, urging the NBA to ‘rediscover’ itself, like the proverbial eagle which can only be true to itself when it realizes belongs to the skies. The NBA, he asserted, rightly belongs in the vanguard of societal regeneration.  He condemned the perception of the Nigerian judiciary as ‘corrupt,’ describing such a perception as too simplistic, and possibly malicious (especially as being peddled by some in the corridors of power). ‘A judiciary that produced the likes of Honorable Justices Kayode Esho, Muhammed Uwais, Alfa-Belgore, Atanda Fatai-Williams and others,’ he said, ‘cannot be dismissed as corrupt because of the actions of a negligible minority.’ Waxing spiritual, he called on Nigerians to ‘speak their desire’ into their institutions, and their judiciary in particular.

The ’35 – 25 – 10’ celebrations came to a close on that high note, as guests came away full of admiration for the accomplishments of one of Nigeria’s foremost lawyers, who is a also a committed Bar man, a man of God, an administrator par excellence, a businessman, a loving husband and father, and a protector of the down-trodden.