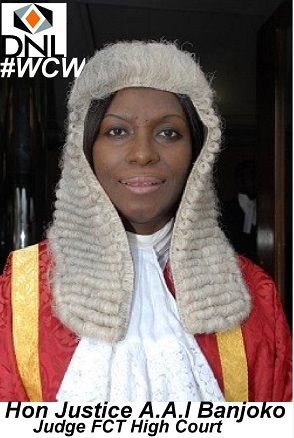 Honourable Justice Adebukola A.I Banjoko is a Judge of the  Federal Capital Territory High Court Abuja who has exhibited rare courage and very high degree of integrity. She has since been tagged “the no nonsense Judge. Whichever way one looks at it, this rare breed of a Judge deserve a lot of accolade in today’s Nigeria.

Justice Banjoko’s integrity has been upscale. In 2016 she called for a law to ban anyone standing trial from holding public office or contesting elections. She made the call while speaking at a conference on Financial Fraud, Cyber Crime and Cross-border Crimes, organized by the Ministry of Justice in collaboration with Digital Forensics Limited. She was quoted to have said: “

“This will ensure the absence of delay tactics and aid effective disposition of the case.

“I had someone who is a high profile person, he is facing heavy charges.

“In the meantime, he left being a governor and despite all the charges, I am not saying he is guilty because it has not been proved, he was re-elected as a senator.

“This deals with the Nigerian psyche that crime pays.

“So we have to do away with this.”

In 2014, while presiding over the alleged $620,000 bribery suit brought against Farouk Lawan, a then member of the House of Representatives  Justice Banjoko’s integrity was questioned by the Defendant through his lawyer Mike Ozekhome SAN. Withdrawing from the suit she was quoted to have said:

“In my 17 years on the bench, six years as a magistrate and 11 years as a judge, I have never been confronted with a scandalous challenge of my integrity.”

Even though the petition was later withdrawn with sincere apology from the Defendant and his lawyer, Justice Banjoko insisted on recusing herself from the suit saying:

“justice is rooted in confidence.” The Defendant had already exhibited lack of confidence in me. “In the prevailing circumstances, I do find it difficult to continue this case.”

Even though we know that the “convicts” have the right of appeal and may have the conviction upturned. We salute the rare courage that Justice Banjoko has exhibited so far. She is indeed a beacon of hope and inspiration.

We are crushing on the Brave Justice Banjoko this Wednesday!