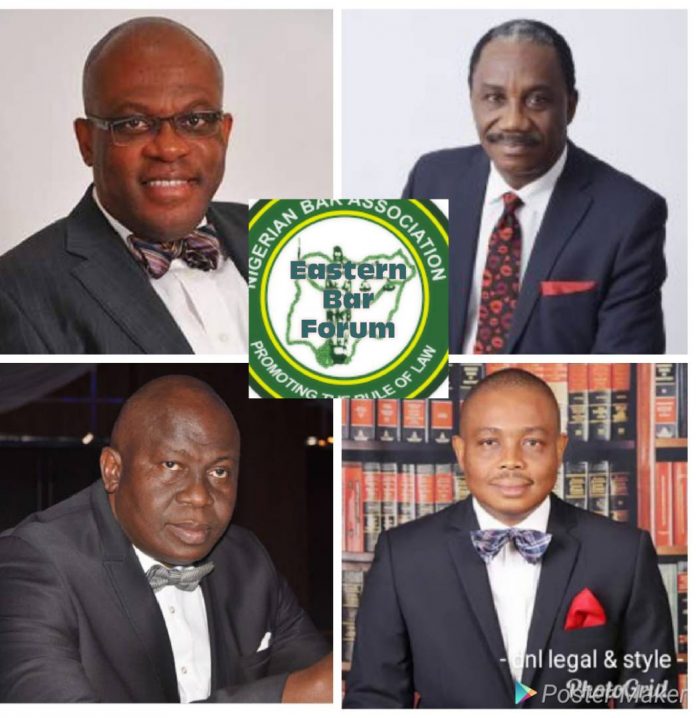 By tomorrow, 1st February, 2018, members of the Eastern Bar Forum (EBF) would arrive Rivers State for their first Quarterly Meeting for the year 2018. 2018 is an election year for the National Body of the NBA and this strategically makes the forthcoming EBF meeting critical to legal practitioners who may be interested in the various National Offices.

On Saturday, 3rd February, 2018, the EBF would hold its General Meeting by 10 a.m. at the Hotel Presidential, Port Harcourt, Rivers State. At that meeting, members would most likely anticipate some form of guidance (more like instruction) on which aspirants, members of the EBF are expected to vote for during the elections.

Top on the lips of members of the EBF is who the EBF ought to endorse for the post of the President of the NBA. The four known persons who may be interested in the post of the President of the NBA are Chief Arthur Obi Okafor SAN, Paul Usoro SAN, Professor Ernest Ojukwu SAN and Mazi Afam Osigwe. There had been various arguments on who is most appropriate for the endorsement of the EBF. I am not going to review those arguments at this stage. The motive of this epistle is to arouse the honest reasoning of EBF.

I am sure in the mind of the leaders of the EBF, they would know that the mere endorsement of any of the aspirants do not automatically confirm that the “anointed” candidate would win the election. If the leaders are in the mistaken believe that their endorsement is an automatic win, then the reality of universal suffrage which started in 2016 has not sink into their political spines.

Let me start by sounding a mild reminder to EBF that the wind of “endorsement” amongst the ethnic based formation of lawyers (Egbe Amofin, Arewa Lawyers Forum and Eastern Bar Forum) has not yielded a positive result in recent times. By way of reminder, I am sure the leadership of EBF would recall what transpired amongst the Egbe Amofin as it relates to Deacon Dele Adesina SAN and Mrs. Funke Adekoya SAN. I am also sure that the leadership of EBF have not forgotten the recent outcome of the meeting scheduled by the Arewa Lawyers Forum for an endorsement in the race between A.B. Mahmoud SAN and J.K. Gadzama SAN. Again, these are not my concerns presently.

Here are the core thoughts I think the leadership of EBF need to resolve behind closed doors before Saturday’s meeting:

a) Ensure the Bar Practicing Fees of its members are paid so that they are eligible to vote during the elections.

b) Monitor the devices of members during election to ensure they vote for the “anointed”.

c) Monitor the electronic movement of votes to ensure that what is reflected at the end of the exercise is an accurate report of all that transpired in the devices that voted.

If the leadership of the EBF has not thought through the above concerns, then…