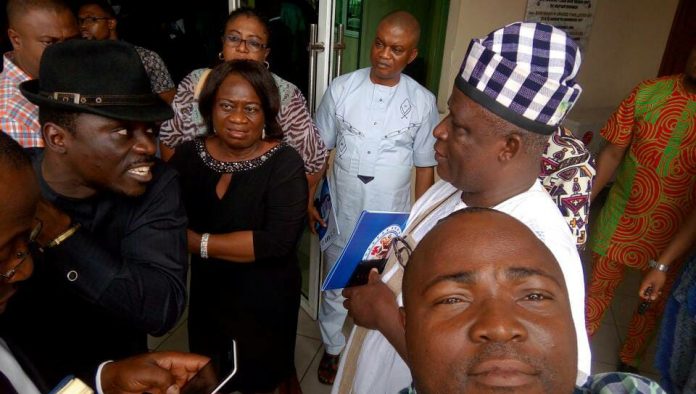 In a bid to ensure that our esteemed readers get all sides of the developing news on the EBF adoption of candidate saga, we would continue to provide update from reports coming in from various individuals and news sites.

Below is as reported by The Grundnorm:

Some Lawyers at the Eastern Bar Forum meeting who opposed the adoption process had their phones smashed as they moved to address the press .

The Eastern Bar  forum has adopted Aurthur Obi Okafor as their Presidential candidate in the forthcoming election of the Nigerian Bar Association to the disdain and chagrin of majority of the lawyers present.

The anti-adoption lawyers immediately began to address the press but some of these lawyers who supported adoption followed them and began to smash the phones of lawyers causing every one to scamper for safety.

The anti-adoption lawyers who are considering forming their own association were later joined by other lawyers who arrived the meeting from other parts of the country.Some of them have come to attend the EBF meeting to sell their candidates but the EBF adopted only their members for the same positions they came to lobby.

They have thrown their weight in favour of the anti adoption lawyers who are in the majority and constitute supporters of the three other candidates.

Some lawyers who came from other parts of the country who were disappointed  in EBF for the selfish adoption of their members for the juicy positions were heard restrategising with the anti-adoption lawyers and has vowed to go home and fight the EBF to prove a point.

Events are still unfolding as the venue is still rowdy